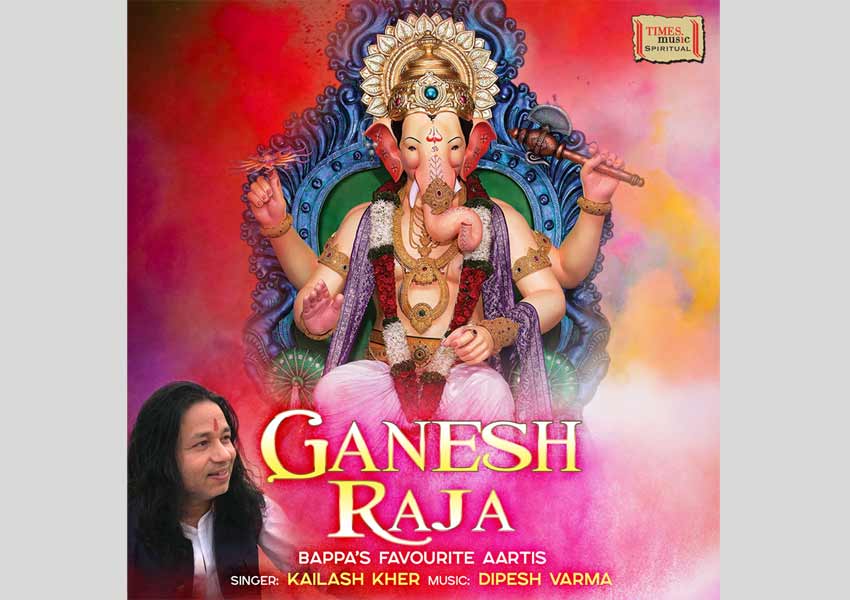 Just in time for Ganesh Chaturthi, Kailash Kher unveils a surprise for all Bappa devotees at Lalbaugcha Raja.

‘Ganesh Raja‘ is a Times Music exclusive release and is a collection of all your favourite Ganpati aartis, in one album. A little over 8 minutes long, the main track ‘Ganesh Raja Sampoorna Aarti’ not only features Kailash Kher’s rich voice, but some unique music arrangements and chorus that are culturally significant and a joy to hear. A total of 10 tracks, the four other aartis included in the album are – Sukhkarta, Shendur lal, Jai Ganesh Deva and Ghalin Lotangan. They are included separately in the album for individual hearing and choices.

Conceptualized and recreated by Dipesh Varma, the track features the thundering of traditional dhol tasha pathak, sweet-sounding Karanatak guitar, very poised Shehnai, a reverberating chorus and with that, an unmissable Ganesh Padhant by Taufiq Qureshi. The idea behind creating the main ‘Ganesh Raja Samporna Aarti’ track was that it can be played at home and in pandals for all their morning and evening rituals of 10 days.

The video features Lalbaugcha Raja in all his glory, over the years. Complimenting Bappa are the snippets of Kailash Kher recording the song in a studio with dhol tasha players, chorus and many musicians in action. You can also spot Dipesh Varma guiding the team, beat by beat. Incontestably, it was decided that the album would be presented and launched to the audiences by Kailash Kher and Dipesh Varma at Lalbaugcha Raja. On 30th August the album went live on YouTube and all streaming platforms.

“I have always felt that this innate energy that I feel is because of my spiritual inclination. When I was offered to sing ‘Ganesh Raja’, I had to say yes, because I am an ardent devotee of Shiv and Ganesh. Singing devotional songs is a surreal experience in itself. I hope people love listening to it too, as much as I loved singing it,” said Kailash Kher.

‘Ganesh Raja’ is a Times Music exclusive release and is available to watch/listen on Times Music Spiritual YouTube channel.

Tags:
Previous Article
Allen Solly encourages women to ‘#Own Your Shape’ with the perfect dress
Next Article
Travel back in time with Koffee with Karan’s Time Machine on Star World