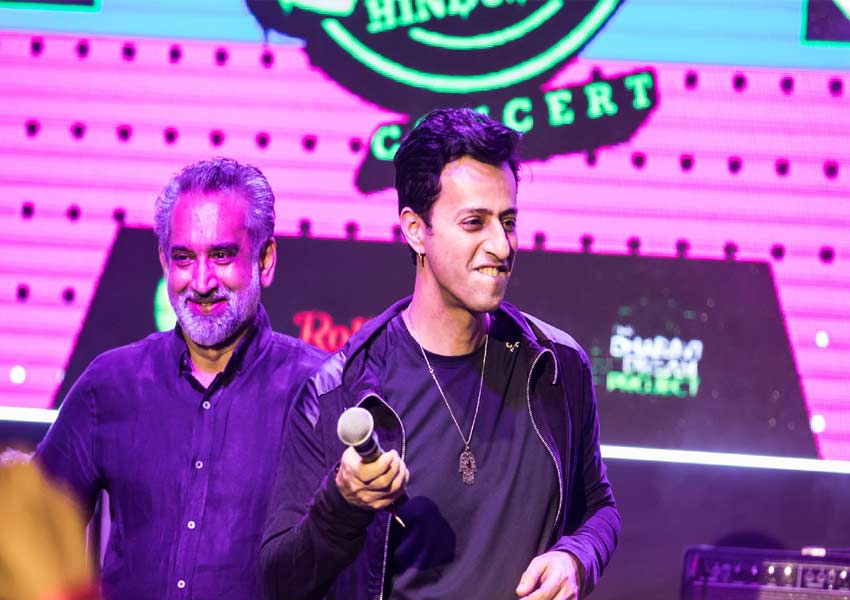 Hosted by RJ Rohini Ramnathan, #HaqSeHindustan’s first outing was a nationwide showcase across nine languages. A melting pot of sorts, the concert brought together a cross-section of Mumbai’s creative fraternity, from composer Salim Merchant to comedians Abish Mathew and Srishti Dixit and TikTok stars Mr Faisu, Adnaan Shaikh, Hasnain Khan, Faiz Baloch and others. Several rappers on the bill also spoke about how hip-hop and music have no language barriers and that it brings people together no matter where they come from.

One of the best representatives of how multicultural and binding hip-hop can be, The Dharavi Dream Project made an unforgettable mark at Haq Se Hindustan Haq Se Hindustan Concert. MCs Younglord, Siddhu and Sky heightened the mood instantly with their “Haq Se Anthem” about the need for women empowerment. The grassroots showcase spilled over to the rest of the night, with their dance crews busting a move. While MC Heam and MC Gubbi collaborated with rising talent such as Void and Madhura Gowda, Chandigarh/Goa rapper MC Manmeet Kaur infused dub and reggae into the mix.

It proved to put the full house in just the right mood for later on. Mumbai crew Dopeadelicz featuring rappers Dope Daddy and Stony Psyko not only brought their Mumbai fire to the Haq Se stage but also showcased their versatility by rapping in Hindi, Marathi and Tamil. Shillong hip-hop crew Khasi Bloodz and New Delhi’s Punjabi wordsmith Prabh Deep both had exceptional live bands enhancing their slick production and it’s probably something we need to see more often in India’s live circuit.

The organizers of #HaqSeHindustan, Nirmika Singh (Executive Editor, Rolling Stone India) and Samir Bangara (Co-Founder and MD, Qyuki) took to the stage to highlight their commitment to promoting local hip-hop. “Hip-hop isn’t just about gullies or fast cars. It belongs to everyone, and that’s what this concert is about. Hip-hop humara hai,” said Singh.

Added Bangara, “We created #HaqSeHindustan and #HaqSeHipHop to build a stage for independent artists. That is our mission and we are thrilled to have the support of the community.”

If you wanted to be treated to experimental hip-hop fusion, then hip-hop crew Swadesi (featuring MC Mawali and MC Tod Fod) and seasoned electronica artist Mayur Narvekar aka Bandish Projekt’s collaborative set was a must-hear. The trio put on a strong showcase with the usage of konnakol, bass-heavy sounds, clever dynamics and powerful rhythms and more.  They crunched out tracks from their collaborative Katal Kalaa and Khulle Naagde EPs such as the Indian classical-leaning “Kar Natak,” the pumping “Ek Se Aanth” and the raucous “Mumbai Aamchi.” Swadesi also performed a chopped and screwed remix version of their hard-hitting protest song “The Warli Revolt” which left no one standing still.

In the run-up to the finale, each of the performing acts of #HaqSeHindustan, who are also the cover stars of Rolling Stone India’s November special issue, were felicitated with a momento presented by Salim Merchant, Samir Bangara, Nirmika Singh, Sagar Gokhale (COO, Qyuki) and Radhakrishnan Nair (Publisher, Editor-in-chief, Rolling Stone India).

#HaqSeHindustan culminated with an enthralling all-star cypher where many of the concert performers engaged in a rap battle. The budding artists of The Dharavi Dream Project stole the cypher with their spitfire verses and unstoppable energy. The artists and audience at #HaqSeHindustan was one of the most energetic we’ve seen in a long time. Clearly, this was the gig Mumbai had been waiting for.