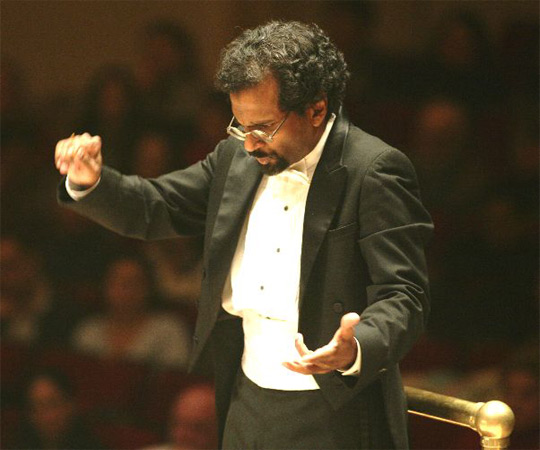 The unique Music for Vision concerts being held at Mumbai and Delhi in October will mark the start of a new phase in the Global Campaign to eradicate Preventable Cataract Blindness with a target to create 50 Cataract Surgical Backlog Free districts in some of the poorest and most backward parts of India by 2020. The country houses the largest cataract-affected population in the world – nearly 15 million.

They will feature legendary Sarod Maestro Amjad Ali Khan; distinguished US based conductor and MFLI Artistic Director, George Mathew; renowned American violinist; Elmira Darvarova (the first woman ever to serve as Concertmaster of the Metropolitan Opera Orchestra in New York); and the Bombay Chamber Orchestra which has brought orchestral music to Indian audiences for more than half a century. The concerts will feature iconic works by Indian and American composers, Amjad Ali Khan who will be soloist in his Samaagam Concerto for Sarod and Orchestra, and Aaron Copland’s Appalachian Spring respectively.

MFLI Artistic Director George Mathew observed, “Music has the capacity not only to bring people together for a cause, it frequently can become the vehicle to illuminate that cause. Aaron Copland’s iconic ballet is an amazing metaphor for the power of community to generate the gift of vision that HelpMeSee seeks to bring to millions of people affected by cataract blindness in India and beyond.”

HelpMeSee, which has successfully worked with 242 partners in nine countries and performed over 248,000 surgeries, created India’s first ‘Cataract-surgical backlog free’ district in Chitrakoot, Uttar Pradesh in 2014 and subsequently replicated this in another four districts (two each in Madhya Pradesh and Uttar Pradesh).

The organisation has drawn up plans to carry out over one million surgeries across India by 2020 with the aim of creating 50 cataract surgical backlog free districts in some of the most remote and backward regions in the country.

It will shortly open its hi-tech centre in Mumbai for creating well trained cataract surgeons using hi-fidelity simulator training systems that are based on aviation pilot training simulator technology.

The campaign will gain additional momentum with the setting up of an India Advisory Board comprising business leaders like Mr Ranjit Shahani, VC &MD, Novartis, Mr Pradip Shah, Founder, Chairman of IndAsia Fund Advisors, and eminent personalities like Ms Hema Malini and Mr Kapil Dev, Mrs. Subhalakshmi Khan amongst others.

Jacob Mohan Thazhathu, President and CEO, HelpMeSee said, “Poverty is the underlying cause of cataract blindness, which constitutes more than half of all blindness in the world. It costs about $100 to treat a single case. With effective Public-Private partnerships our dream of eradicating such blindness from India can be realised.”

Tags:
Previous Article
WATConsult announces the launch of INNOWAT – an innovation lab
Next Article
FLAME University announces collaboration with Nuffield College in the University of Oxford