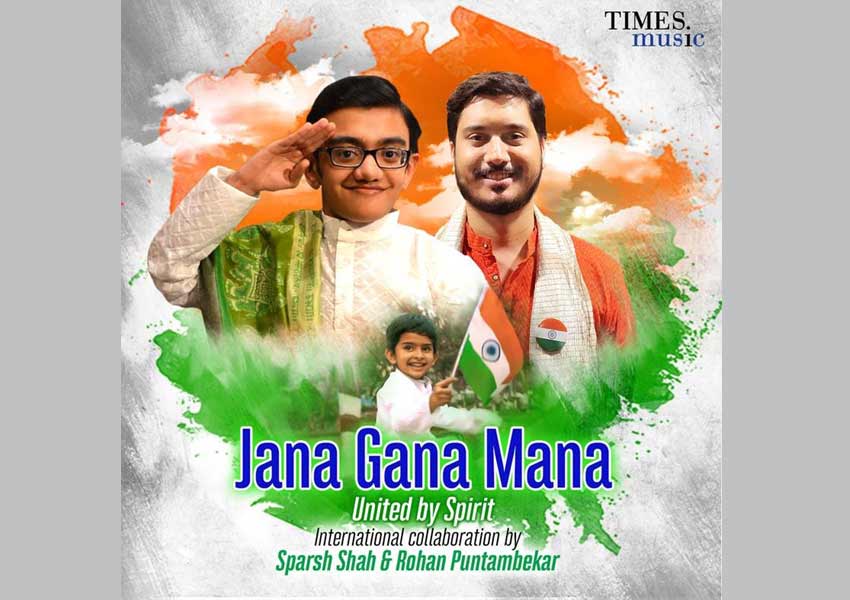 Times Music releases a refreshing version of India’s National Anthem Jana Gana Mana, beautifully sung by the child prodigy from New Jersey – Sparsh Shah and the music has been produced by the very talented singer, composer and producer Rohan Puntambekar. The recreated version of the anthem is welcoming and has the prowess to evoke the feeling of patriotism in all. Jana Gana Mana is Times Music’s exclusive release and available on its YouTube channel.

On asking about this recreated version, Sparsh quoted, “Both me and Rohan were planning to do a musical collaboration. We met on Facetime and decided to start a music project around the Republic Day occasion. So, we brainstormed and came up with a recreated version of our National Anthem and tried to give it a refreshing touch. We did the recording and video shooting via Facetime, Skype and other modes. The entire process was simply amazing!”

“Sparsh is an exceptionally talented boy and at such a young age, he has become an international fame. This is my first collaboration with him and it’s a pleasure recording Jana Gana Mana with him,” quoted composer Rohan Puntambekar.

Sparsh Shah is a multi-talented and popular, 15-year-old singer, rapper and a motivational speaker from New Jersey.  He was born with an incurable disease called Osteogenesis Imperfecta, also known as the brittle bone disorder. But this didn’t stop him from dreaming big. He has already enthralled audiences across the Globe with his inimitable singing, rapping. He is a professionally trained singer in Hindustani classical and American vocal music. He was honoured at the Champions of Hope awards ceremony in Los Angeles (2017)  for Brittle Bone Rapper, a documentary film based on his life. He has been a speaker at various platforms, including TEDx talks.

Jana Gana Mana  is  Times Music’s exclusive release and is available across all the digital platforms for people to enjoy.

Tags:
Previous Article
Bajaj Finserv celebrates the New Year with #FitForLife Campaign
Next Article
Forever 21 launches new collection that takes you back to the 90’s