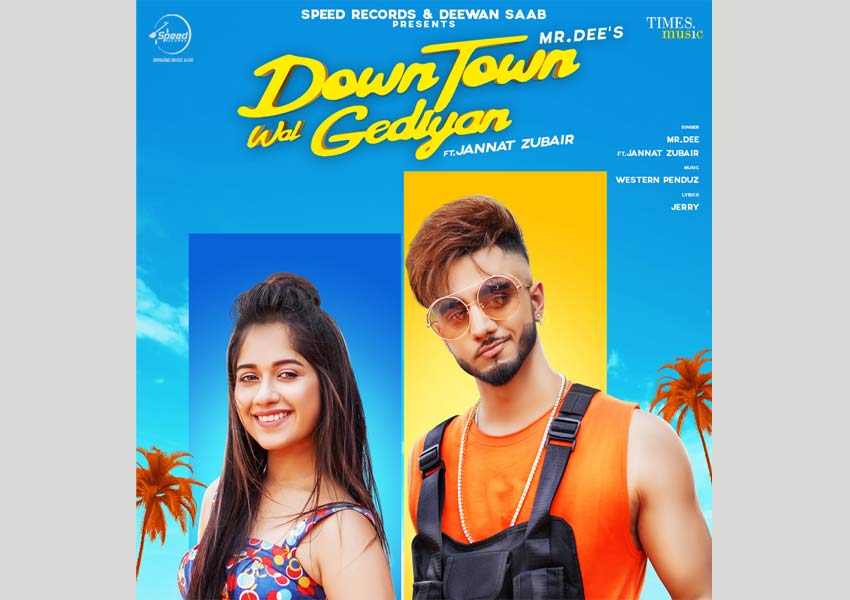 Times Music in association with Speed Records presents ‘Down Town Wal Gediyan‘. Sung by Mr. Dee and composed by Western Penduz, it is a foot-tapping Punjabi love song. The song features the very talented and extremely beautiful, Jannat Zubair.

Western Penduz are known for their unique style of music and they are quite the internet sensation, themselves. From ‘Fruit’ – their top Punjabi single with The Landers to their very recent single this year – ‘No Relationship’, it’s only fair to say that their compositions strike a chord with the youngsters.

Jannat Zubair is not a new name in the Indian household. This gorgeous, young actor has been working in the Television industry for almost a decade. We have absolutely loved her ever since she took on the role of ‘Phulwa’ on Colors TV. She has also starred in many TV shows, films and is also an uncontested social media celebrity with 9 Million followers on Instagram, alone.

The video of ‘Down Town Wal Gediyan’ features Mr. Dee and Jannat Zubair in a posh international location.  It’s a cliff-hanger at every step of the way and it will leave you wondering if the main characters will or will not fall in irrevocable love.

“We believe in creating music that can be played everywhere. In the gym, while driving, travelling or in a party. So when someone listens to the song, they can’t really boil it down to just one genre. We have done a lot of upbeat tracks and we wanted to do a happy love song. And this song just happened to be the perfect one,” said Western Penduz.

“When I was approached for this song, it was love at first listen. The beats, the music and the voice – everything sounded perfect. I had a great time shooting the song. We had a great crew working on the track. It was great fun,” said Jannat Zubair.

‘Down Town Wal Gediyan’ is a Times Music and Speed Records exclusive release and is available to watch/listen on Speed Records YouTube channel.