After the roaring success of World Flute Festival that celebrated its 6th edition to restore languishing wind instruments and re establish their artistes, Holi Utsav and World Percussion Festival. Krishna Prerna Trust brings to you India’s First International Qawwali Festival 2016- Taali Ho. The event aims to reinforce a notion that music is not restricted to any borders.

Masteros of Qawwali sufi music from  Pakistan, Fareed Ayaz, Abu Mohammad and Nizami brothers (Ghulam Sabir Nizami and Ghulam Waris Nizami) from India jointly unveiled the “Qawwali Festival 2016 ‘Taali Ho’ which will kick-start from 12th Feb 2016 to 14th Feb 2016.  The Festival will act as a catalyst in bringing along the renowned Qawwals from across the globe which will take the centre stage and together will strike chords with their soulful music taking you to another world.

Shri Arun Budhiraja, Founder of Krishna Prerna Trust said, “Qawwali is ‘a method of worship’ and ‘a means of spiritual advancement’; it is also ‘a feast for the soul’. To the performer it is mainly a musical genre ‘with its distinct character for worship’. To the observer, Qawwali is ‘music in context’ par excellence. Krishna Prerna Trust has always been working towards taking you to different unexplored or forgotten genres of Music, Traditions and culture”.

Internationally acclaimed Pakistani Sufi Singer, Fareed Ayaz said, “We thank the Trust & Mr. Budhiraja for putting his constant efforts in reviving & preserving the various form of music. As an artist & Sufi music enthusiast I believe such kind of platforms should be encouraged as they not only help in bridging the gap between audience and artistes but also helps in learning & constantly evolving with our techniques.”

Sufiana legend, Ghulam Sabir Nizami from Nizami Brothers, experts in the Sufi style of music & modern qawwali tradition avers, “Now qawwali has become a secular, to India, to Pakistan, to USA, to Fiji etc, it transforms to reflect local sensibilities and concerns. In the US and the UK, qawwali is re-imagined in a way that emphasizes the social justice aspect, focusing on the figure of Ali. It also crosses religious boundaries, so that Hindus, Jews, and Christians produce qawwali music.”

“With all these transformations Qawwali has evolved a lot and with Taali Ho we hope we will be able to present the fusion of old genre of music with a modern touch. We also wish such platforms should be promoted more so that they can showcase the best of music world to its appreciators”, he added.

Apart from other Qawwalis that the artistes performed at the curtain raiser event, Pakistani Qawwals sang their famous number ‘Kanhaiya’ that shows the religions and borders both cannot bind the ethos of soulful music. Music is where listeners are and the greatest listener is the soul that appreciates oneness with love, peace and harmony. True love binds people, is the message International Qawwali Festival aims to spread.

With this Festival Krishna Prerana Charitable Trust aims to train youngsters to come to the main stream of Qawwali singing. Training would be taken up by Fareed  Ayaz Saheb and Nizami Brothers. It is in line with what the Trust has done with wind instruments through their program of ‘Saans’ whereby young children are taught to play flute.  Training in Flute is undertaken by the doyens of Indian Classical Music like Pt Hariprasad Chaurasia and others. 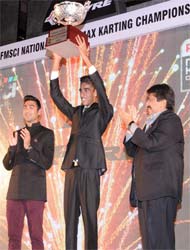