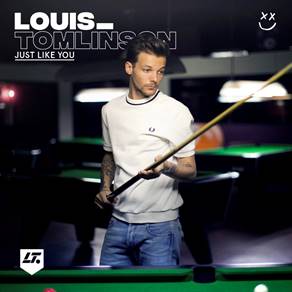 Louis Tomlinson premiered a new song ‘Just Like You’ yesterday, as a special fan track release. In addition to ‘Just Like You’, a brand new Louis single is set to follow later this year.

‘Just Like You’ is a modern mid-tempo pop song written by Louis, BURNS and Jesse Thomas and produced by BURNS. Lyrically the track tells fans how Louis is emotionally just the same as them, a sentiment that is sure to resonate with his millions of followers globally.

Louis says: “Just Like You is a song I’m really attached to. It’s all about this view of celebrities that we’re impenetrable and almost not human, but fundamentally we all have the same problems. Heartbreak feels the same, loss feels the same, all these feelings are the same for all of us.”

The song is available across all platforms now. Listen here: http://smarturl.it/JustLikeYou_LT

Louis’s recent single ‘Back To You’ featuring Bebe Rexha and Digital Farm Animals has been a global smash reaching No.1 in 37 countries and selling over 1 million copies.

Louis is currently recording his debut solo album, due for release in 2018.

Louis Tomlinson’s ‘We Made It’ – New Single Released Today