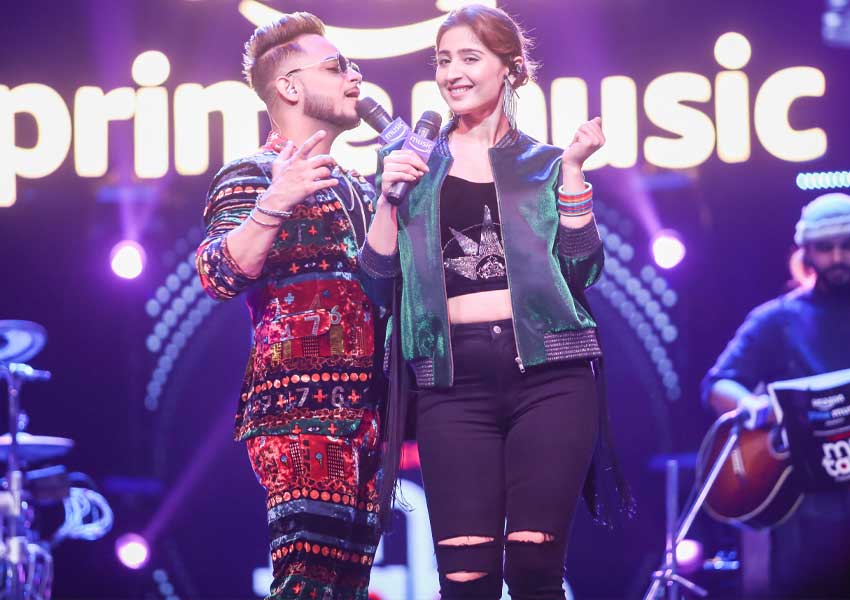 After a stupendous start with the first two episodes, T-Series MixTape Punjabi Season 2 ups the tempo with Millind Gaba and Dhvani Bhanushali ’s super energetic rendition of She Don’t Know and Akh Lad Jaave. The result is a pulsating melody that will leave you grooving.

The two young performers pour their hearts out in this track, taking the music to higher notes, tremendously aided by Abhijit Vaghani’s creative mixing of the two songs into one. Directors Radhika Rao and Vinay Sapru put up a show that is bound to blow you away with its vivacity.

Sahas Malhotra, Director, Amazon Prime Music, said, “The first two performances on T-Series MixTape Punjabi Season 2 have already gained immense popularity on Amazon Prime Music and the next one by Millind Gaba and Dhvani Bhanushali is sure to be no different. Listening to them perform together on She Don’t Know & Akh Lad Jaave in this episode is a treat for Prime members to listen adfree, first on Amazon Prime Music.”

Putting forth her excitement about this season of MixTape Punjabi, singer Dhvani Bhanushali says, “Shooting for MixTape has always been fun, the set created was so different from the other MixTapes that I have done before. The vibe on the set is great and everyone just has fun while shooting. MixTape gives you the liberty to give a song your own expression whilst keeping in mind the original.”

Dhvani along with Millind can be seen fully immersed while performing the dance track. When asked if it requires a special kind of skill to be able to sing and dance at the same time, the confident young performer responds, “I don’t really think so. The song makes you groove to it, and I, as an individual love dancing.”

Millind Gaba shares his reasons for selecting Akh Lad Jaave and She Don’t Know for T-Series MixTape Punjabi Season 2.  He informs, “These two songs already had been super hit blockbusters and I personally wanted to do something special with She Don’t Know. So we mutually chose these tracks.”

Millind, has been part of MixTape series in the earlier season as well. Describing his experience of T-Series MixTape Punjabi Season 2, the singer adds, “Bigger sets, bigger canvas and most importantly everyone on the set worked harder than before. Radhika ma’am and Vinay sir had a fabulous focus. I think they pulled it off amazingly!”

Dressed in a bright, colourful attire, Millind ensured that he went out the whole hog. Director Radhika Rao even conferred on him the title of the best dressed man on the show. Far from being shy, Millind has pulled out all stops to display his showmanship by dancing unabashed as he belted out the track. In hindsight he offers, “I just don’t know how to explain this. When on stage, I am totally a different Millind Gaba. I feel I have all the energies of the world and I perform as if there is no tomorrow. I cannot tell how my love for stage gradually has increased to a super high point in all these years.”

Listen to playlists curated specially for you on Amazon Prime Music