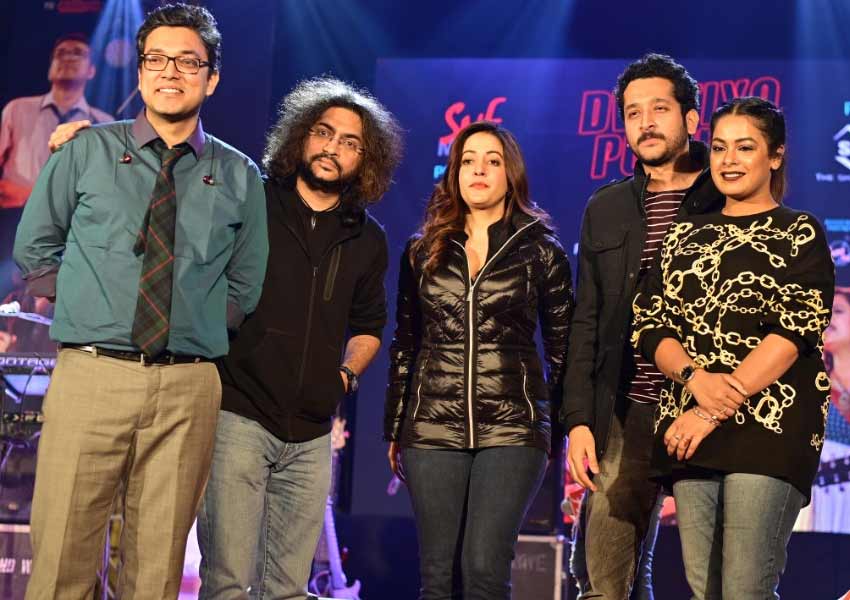 Traffic snarled, roads blocked today in the city of Joy. Only for the reason- Dwitiyo Purush Music Live, powered by Tata Structura witnessed the City of Joy swarm into the City Centre I –Kund area today to experience the musical trio – Anupam Roy, Rupam Islam and Iman Chakraborty togethercelebrate the journey from Baishe Srabon to Dwitiyo Purush.

9 years ago, SVF and director Srijit Mukherji created a masterpiece called Baishe Srabon that became a sensation among the genre of thrillers. The music of Baishe Srabon was an instant hit among the audience and still hold record views. Now, nearly a decade later, the makers are back with its spin-off Dwitiyo Purush that has a gripping storyline, with a music album that becomes the first Bengali album of this year to trend across social media!

The musical evening started with AnupamRoy crooning the melodious Ekbar Bol (from Baishe Srabon) followed by Anupam & Iman singing a duet to the popular romantic number Je Kawta Din Reprise from Dwitiyo Purush. Rupam Islam took to stage with his new song Aami Aachhi (from Dwitiyo Purush)and set the stage on fire when he joined Anupam Roy to sing the sensational number Ei Srabon, a song from Baishe Srabon that has topped the charts and remained popular even after a decade.

Talking about this musical evening National Award-winning musician Anupam Roy said, “Baishe Srabon marks my debut as a music director in this industry and hence holds a special place in my heart. Now a decade later I’ve composed music for its spin-off Dwitiyo Purush and the songs are already chart-toppers. I’m extremely touched by the audience response that I have received! “

After his power-packed performance nationally acclaimed musician Rupam Islam said, “Baishe Srabon saw Anupam and me collaborate to bring out some of the most popular tracks of the last decade. Now 10 years later we are coming together again for its spin-off. I’m elated with the response we have received from the audience for both the films!”

The story of Dwitiyo Purush is set in two timelines – 1993 and 2019. In 1993, Chinatown, Kolkata – a gang war takes place between notorious gangs and quite a few murders happened. Police gets involved and finally is able to arrest the culprits. The entire incident gets covered up with political powers and influences.

26 years later, similar incidents take place in Chinatown, Kolkata – from exact similar locations to pattern of murder – everything. The case goes to none other than Abhijit Pakrashi (essayed by Parambrata Chatterjee), who is taken to be one of the best in this area, after he solved the very famous Prabir Roy Chowdhury (essayed by Prosenjit Chatterjee) case in Baishe Srabon. Abhijit along with his assistant, Rajat (Gaurav Chakraborty), starts off with their investigation only to come to a horrifying ending and brutal discoveries.

Dwitiyo Purush, directed by Srijit Mukherji, releases nationally on 23rd January 2020 as the first official release of SVF for 2020. Apart from Kolkata and other cities of West Bengal, the film will be screened across theatres of New Delhi & NCR , Mumbai , Bangalore, Pune etc amidst much anticipation.

The music of the film has been rendered by National Award-Winning Musician Anupam Roy.