PSE handled and executed the concert ‘Anirudh Live in KL’ 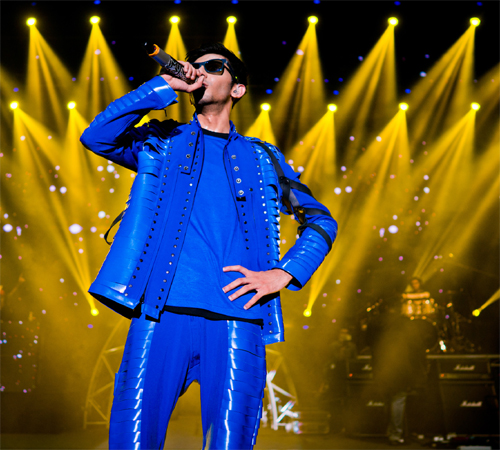 Percept Sports and Entertainment, the Strategic Business Unit of Percept One, handled the mandate of conceptualizing and executing the live concert of Anirudh Ravichander, composer of the song “Why this Kolaveri Di” in Kuala Lumpur, Malaysia. The concert titled ‘Anirudh Live in KL’ was held on 13th February 2016 at the Merdeka Stadium and was attended by a massive fan crowd of 10,000 people.

Anirudh Ravichander is an Indian film composer and singer. He made his debut in the Tamil film ‘3’, directed by Aishwarya R. Dhanush. The song, “Why This Kolaveri Di,” that Anirudh had composed went viral on YouTube and received more than 100 million views.

The heartthrob, composer, and singer Anirudh Ravichander was back in Malaysia for his second concert after successfully completing his music score for 11 blockbuster films. He said, “”I was only supposed to come back here again in 2017 but the love I received from the people here got me back. So many people have approached me and written to me. Malaysia is great… it’s like my second home.”

Accompanied by a small rock style ensemble, which included the talented Ananth on violin and Keba Jeremiah on Guitars, Anirudh belted out his most iconic songs from blockbuster movie hits such as VIP, Ethir Neechal, Maari and Vedhalam. Besides Anirudh, the concert featured local talents including Rabbit Mac, Switch LockUp, DJ Biggie and Balan Kashmir.

This mega event followed in the footsteps of the phenomenal success of the live concert ‘Anirudh Live in Toronto’ which took place at the Powerade Centre, Toronto, Canada, on 12th December 2015. This live show saw a massive crowd turnout of 6,000 people, and the amazing feedback from the audience led to the second successful concert being held in Kuala Lumpur in February 2016.

“Anirudh has always been one to create music that pulsates with the heartbeat of the youth today! He connects very well with the audience and  brings a truly westernized take on Tamil music concerts with a rock and roll EDM (electronic dance music) themed show which caters to a wide range of today’s audience. Be it the Western regions of Canada or the far Orient, Anirudh’s songs are adored by fans alike. The right on-ground experiential setting, coupled with his popular songs, offer the perfect recipe for a successful and memorable live concert”, said Sameer Sethi, Associate Vice President, Percept Sports and Entertainment.

He further added, “From a macro positioning, the show was definitely customized to suit the younger TG and was designed in a manner to play out as a mega dance party rather than a live musical performance. Our team has been the one point contact when it comes to all his international shows in terms of designing and executing the entire ground event.”

Commenting on the successful show, Jayaram Nair, National Business Head, Percept Sports and Entertainment said, “These back to back successful concerts in Toronto followed by KL reinforce Percept’s skill and dedication to breaking new frontiers in the live events domain across International geographies. The great feedback received both from the artists and the crowds bear testimony to the hard work and commitment invested by the Percept Sports & Events team. We look forward to managing many such prestigious live events overseas going forward.”