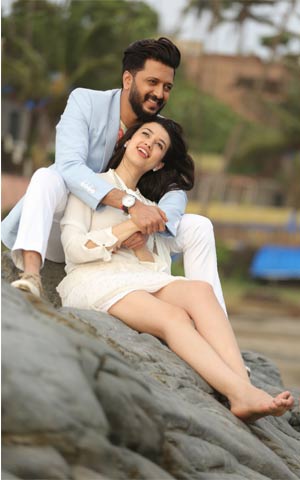 Sony Music Pop, the pop division under global music giant Sony Music today revealed the male lead in multi-talented composer Arko’s pop song- AAINDA, and it is none other than the versatile actor-producer Riteish Deshmukh.

The song which is an ode to idealistic love, presents a crackling chemistry between Madalina and Riteish and the video is touted to be the most romantic video that promises to make you want to hug your loved one. The teaser of the song that was revealed last week has been doing phenomenally well and fans have been wanting to watch the full song video.

Says Riteish Deshmukh on his pop debut, “This is my first pop music video and I’m glad that it is with Sony Music. The audio is beautiful, the video is beautiful and I can’t wait for you guys to see it.”

Adding on Rohan Jha, Lead Pop, Sony Music India says, “Arko had already given us a great song. With Riteish and Madalina featuring in the video and Prawaal Raman directing it, the song now has a video it truly deserves. We are sure this song is on its way to become the love ballad of the year.”

Composed and sung by ARKO himself, the song has a tune that is instantly hummable and will stay with listeners for a long time. The song lyrics penned by ARKO, is about a couple at the brink of separation trying to find possibilities to find love in each other again.

The song video is produced by Produced my Sony Music and will be out on Sony Music’s YouTube channel at 7 PM today.

The Production houses involved in the video have been Wild Elephants and Yuvraj Entertainment.

Multi-talented ARKO asks fans to guess who the male lead in his pop song AAINDA is?
MediaInfoline Aug 09

Multi-talented ARKO asks fans to guess who the male lead in his pop song AAINDA is?