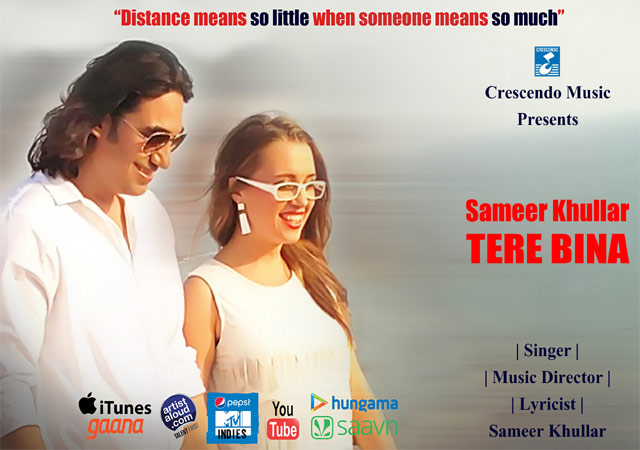 Sameer believes in the fact that “Absence makes the heart grow fonder”. His song ‘Tere Bina’ truly justifies this reality and shows the happier side of a couple who is distant, missing each other but still very much in love. The song conveys the message “Distance means So Little when someone means So Much“.

It also marks Sameer Khullar’s debut as a singer. The song not only proves his ability as a music director & lyricist but also highlights his singing ability.

The song has received an overwhelming response on You Tube since its release on 1st July 2016 (Link: https://www.youtube.com/watch?v=5_qIJQyBaCw). It has crossed 3,30,000 views till now has made Sameer Khullar another you tube sensation in the making. The video is getting views from all parts of the world as it’s released with English subtitles. It has got Trending in South Africa & Russia and been put on various news websites like leadstories, trendolizer, facenfacts etc. The song has also been picked up by MTV Indies and is on air since 17th August 2016. Sameer has also been interviewed by many radio stations like RED FM (India), LENZ FM (South Africa), Skyeradio (World) etc and the song is also being played by them. The song has also got selected as an “Official Selection” in the “Calcutta International Cult Film Festival (CICFF) 2017”, “Semi-Finalist” in “Los Anglese Cine Fest” under ‘Music Video’ category and has won the “Best Music Video” award in “Moscowcity International Film Festival 2017”.

The best people from the music circuit from various countries have come together to create this masterpiece. The video is directed by bollywood director Aziz Zee (Dubai) featuring Sameer Khullar (India) & Maria Jurkina (Russia). The female vocals are done by Shashika Mooruth (South Africa) & the song is mastered by Steve Nagasaki (USA). The track is arranged and mixed by Gaurav Chintamani, the strongest pillar of Band Advaita who has recently given music for Bollywood film Wazir.

The song has been released by Crescendo Music – the brand that has not only promoted many major international artists like Santana, Whitney Housten, Kenny G, Yanni, Westlife etc. in India but also launched the careers of superstar Indian artists such as Anaida, Mika Singh, Lucky Ali, Nitin Bali, Sukhbir and Mohit Chauhan.  It is available on all the major digital music stores like gaana, saavn, hungama, itunes, artistaloud etc.

The lyrics of the song ‘Tere Bina’ have purposely been kept simple and the song is composed in pop and rock genre so that the youth could relate to it and it reaches to more and more people. Sameer’s songs & remixes are very much loved in the international market. Out of all his songs that have been released so far as a composer & lyricist, ‘Mann Banwaraa’ & ‘Bas kar Delhi – It’s enough now’ have bought him most attention both by the media & the public. He has even won an International Music Award for his song ‘Bas kar Delhi – It’s enough now’.

Sameer says, “If my latest song Tere Bina can bring together even some of the couples whose relationship and love has been affected due to long distance, I will feel that my song has got its credit.”