“Till today, I feel that I cannot sing well. There is still a lot to learn…”- Anup Jalota 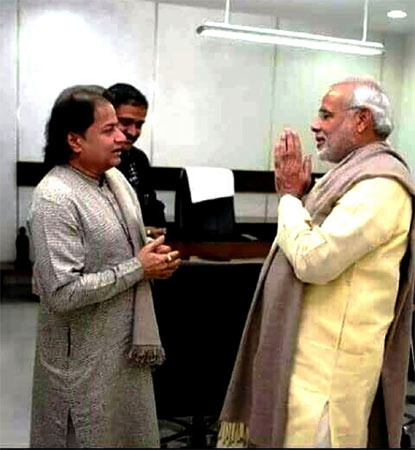 Anup Jalota Films presentation’s humorous film Mr. Kabaadi produced in association with Sadhana TV and Om Chhangani Films is all geared up to lit the screens in August.Written and directed by Seema Kapoor for producers Anup Jalota, Rakesh Gupta, Dinesh Gupta and Om Chhangani, Mr. Kabaadi  is all set to tickle your funny bones.

Bhajan exponent Anup Jalota and the producer of this comic caper who likes a chilled out atmosphere had a glitter in his eyes. Interestingly, he has been producing movies since the 90’s. The multiple awards winning talent takes us down the memory lane, reminiscing on a lifetime of melodies. The Bhajan samrat who has been singing from the very tender age of 5 has completed 55 years of his singing career as well. Jalota’s first album titled Nirgun Bhajan was released when he was just 14. Singing bhajan since the very young age has always been his first love.The power of divine music has been rewarding in his artistic and prolific journey. Till date, he has sung more than 3,000 songs and bhajans of which; “Aisi Laagi Lagan….”, “Maiyya Mori Main Nahi Maakan Khayo…..”, “Jag Mein Sunder Hai Do Naam…..” and many others are still alluring the listeners. The versatile performer has even scored music for films like Patton Ki Baazi and Tohfa Mohabbat Ka.

People say that singing bhajan is done in old age, but Anup Jalota says, “I have been singing bhajans since childhood and have grown older with it. I have earned name, fame, money, respect and love by singing bhajans. Looking back at my success story, I feel people have a wrong notion. During pooja we offer fresh flowers and fruit to God. I feel the rituals of pooja and bhajan should be done and rendered from our tender age which helps you in attaining concentration and spirituality.”

“The burning desire for creativity makes all the difference,” adds Jalota. Speaking about the film, he quips, “I love to make people laugh. Even in my concerts, I always crack jokes. It gives one a moment of respite.” He further says, “Mr. Kabaadi is an out-and-out comedy fare. Om Puri and Annu Kapoor are power performers. Many scenes with cranks of Vinay Pathak will take one on a roller-coaster ride. The film has shaped quite well and should do well at the ticket windows. I won’t be surprised if the film touches the 100 crore club too.”

The man who has acquired the much-cemented image of ‘bhajan samrat’ over the years has rendered for films like Ek Duje Ke Liye, Nastik, Manoj Kumar’s Shirdi Ke Saibaba, Padosan, Patton Ki Baazi, Professor Ki Padosan amongst many others and it was an enjoyable fare. He feels that singers should surely learn classical music and it will help them attain greater heights. Even after 55 years of his singing career, Anup Jalota says, “Till today, I feel that I cannot sing well. There is still a lot to learn. I feel that to learn anything fully, even the life feels short of it. Every day is a learning process and we learn something new with each passing day.At any point if one feels he is the perfectionist then it puts a spanner in his growth and achievements.”

Anupji has completed his education in Lucknow (Uttar Pradesh) and visits the city often. He confides, “I like Lucknow city very well. I feel cheerful and relaxed and thus I visit the city time and again.”