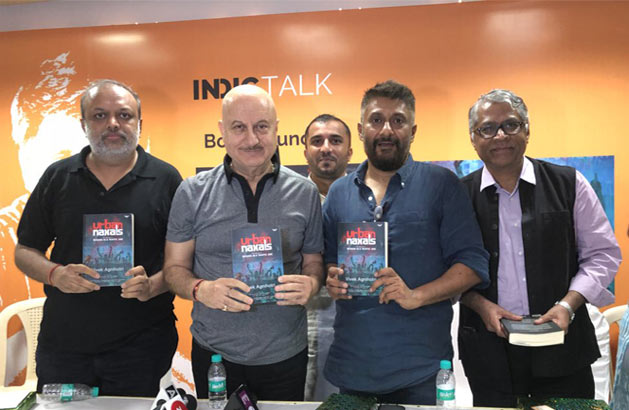 Anupam Kher graced the ocassion and applauded Vivek for his efforts. He said, “It was a pleasure working with Vivek on the film Buddha in a Traffic Jam. I wish him all the best for the book.”.

Urban Naxals currently stands 1st under Political Ideologies on Amazon. The book encaptures the riveting saga of a filmmakers struggle and conviction, the behind the scenes story of the making an award winning film- Buddha in a Traffic Jam. India’s naxal ‘Maoists’ are listed among one of the top terror groups in the world. Earlier considered only active in jungles and remote places, Agnihotri unmasks the vast urban network, including leftist academia, media, NGOs and intellectuals, which supports and fuels this terror- starting from his owm professor in college days. These are the Urban Naxals, a topic rarely explored- in film, or in a book.

About the author- Vivek Agnihotri:-

Vivek is an award winning filmmaker and writer. A public speaker and an opinion leader in a highly partisan and aggressive environment in current times which is fueled by social media. An ex-advertising man, Vivek is a very popular public speaker on socio-political issues and lectures on ‘Creative Thinking’ and ‘Innovation’ in top global institutes.

His prophetic film ‘Buddha in a Traffic Jam’ dealt with the theme of Urban Naxalism and exposed the sinister nexus between the Naxals, Media, NGOs and academia. The film faced extreme resistance from the Left and was stuck for five years before Vivek traveled across India to show his film, facing violent attempts to curb his freedom of speech. Vivek is an avid traveler, columnist and a social media influencer. He is married to national award winning actor Pallavi Joshi and has two children.

“Actors Are Not Born, Actors Are Made,” – Anupam Kher At Whistling Woods International
MediaInfoline Aug 08

“Actors Are Not Born, Actors Are Made,” – Anupam Kher At Whistling Woods International