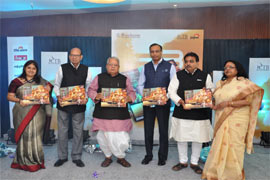 With the release of its new coffee table book- Banaras: City of Million Tales, Jagran Prakashan Ltd. has added another remarkable book to the kitty of Jagran Coffee Table Books (JCTB), which has brought out yet another trove of aesthetic and erudite delight to its readers. Third book in the series of Great Cities and 15th overall, the book unearths the perennial glory of the sublime city of Banaras. The book was unveiled by Union Minister Shri Kalraj Mishra, at a plush city property, in the presence of senior Jagran officials and prominent entrepreneurs of the region.

The 150-page book is a running narrative about the city’s fabled history and its primeval place in religious discourse of the country. Landmark temples, shrines, key ancient monuments and other places that are witness to the periods of glory of the city have been covered in fine details, alongwith the history and grand festivities associated with them. The book also talks about the significance of Ganga in the lives and minds of the devotees. It carries some breathtaking shots of Ganga and its ghats, which one can gaze through and enjoy.

The legendry educational institutions of Banaras, till today, are hallmark of excellence. No wonder, the literature that has emerged from Banaras is considered to be most exquisite and outstandingly impactful. The book touches upon the times and lives of some of the finest educational institutions and litterateurs of the city. The culture of music and dance is also something very special about Banaras, which has been showcased in the book with rare photographs.

The artistry, which includes Banarasi sari, carpets and pink meenakari and the street food of city have earned it name and fame. The same has been covered in good details. There is a special 8-page centre spread with some of the interesting real time shots which tell tales of the spontaneity of the city. It also carries perspectives of some of the most prominent personalities of Banaras, as nice breakaway feature.

Speaking at the release function, Shri Kalraj Mishra shared his understanding about Banaras, having been associated with the city for a long time. “The real strength of Banaras comes from its people. The simplicity and candour of Banarasis make them unique. This holy city is an epitome of religious harmony and therefore has a special place in the religious landscape of this great nation. This is what makes it great. I really believe that this book does justice to the grandeur of this fabled city.”

Shri Virendra Kumar Gupta, Director, Jagran Prakashan Limited also expressed pleasure at the development. “I am happy to see a book coming out on Banaras, which so aptly captures the special essence of the city. It is not easy to unlock the mystery of Banaras. It has been tried before, and rightly so, but ‘Banaras: City of Million Tales’ does it in a way that is refreshingly entertaining and scholarly.” He also congratulated the JCTB team for their upfront commitment and hard work.

The book has been authored by accomplished writer Benul Tomar, who had close brushes with the city during this project and he was quick to acknowledge the enigmatic charm of banaras. “It was fascinating to be able to write such a book. Although it is next to impossible to fathom the grandeur of Banaras in a book, which unlike the city, has limited scope and extant, but we have made sincere efforts not to miss out anything which is central to know the city better. This book is a precious collector’s item, to my mind.”

Vice President of India, Mr. Venkaiah Naidu launches book, “Not Many, But One”
MediaInfoline Jan 23

Vice President of India, Mr. Venkaiah Naidu launches book, “Not Many, But One”