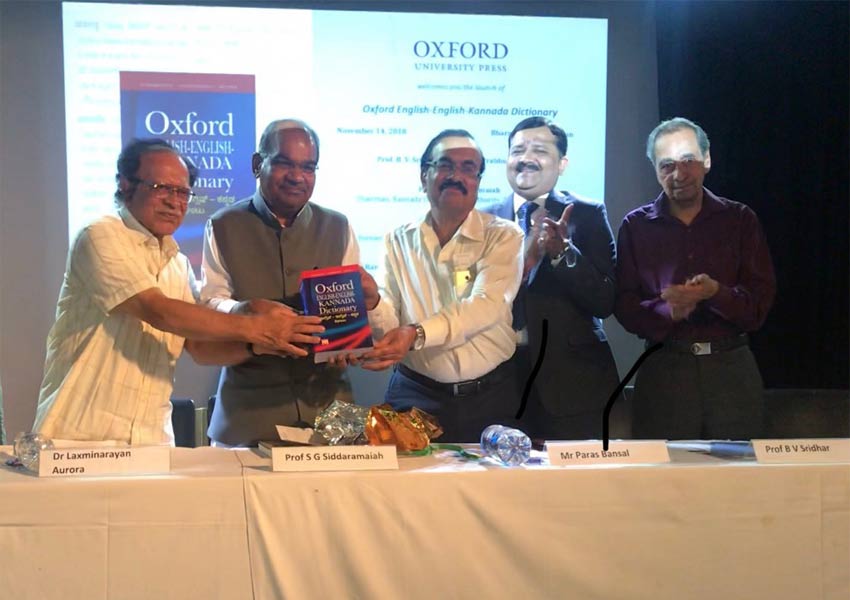 Oxford University Press announced the launch of the Oxford English-English-Kannada Dictionary at an event hosted in the city. Prof. S.G. Siddaramaiah, Chairman, Kannada Development Authority, Government of Karnataka, was the Chief Guest at the launch event.

Commenting on the launch of the dictionary, Sivaramakrishnan Venkateswaran, Managing Director, Oxford University Press India, said, “We are delighted to come out with our second English-English-Kannada dictionary, following the landmark Oxford Compact English-English-Kannada Dictionary that has a large user base in the region. Our second bilingual dictionary in Kannada, is not only pedagogically more advanced but designed along the contemporary methods of learning and teaching languages, enabling speakers of Kannada to also learn English seamlessly. He added, “OUP’s bilingual learning material, including Grammar books, have a strong uptake from young learners desirous of improving their career prospects by learning English.”

The English-English- Kannada Dictionary has over 52,000 up-to-date entries and related phrases and idioms in English language, with their translations and one-word equivalents in simple Kannada. The dictionary aims to be a formative guide for Kannada language speakers aspiring to learn the English language, and provides a pronunciation guide in both IPA and Kannada. It contains example sentences and a wide range of scientific and technical vocabulary, including over 200 illustrations, synonyms and antonyms in English. It also contains detailed notes in Kannada on English grammar, vocabulary and usage, along with 5 appendices covering English grammar, prefixes, suffixes, and irregular verbs.

Prof. S.G. Siddaramaiah, Chairman, Kannada Development Authority, Government of Karnataka, said, “A dictionary represents the history of a language and is always influenced by new developments and other languages; losing some words and gaining new ones in the process. As the knowledge of the world is always expanding, similarly, a dictionary is an ever growing resource. It is extremely important for the newer generations as it helps make them familiar with words and nuances of the language which might have been long forgotten. Further, compiling a dictionary requires collective effort and a rich exposure to the language as well as various knowledge branches such as medicine, engineering, etc. Oxford University Press India has been carrying out their dictionary work in a scientific manner for multiple regional languages, and I positively believe that the Oxford English-English-Kannada Dictionary will prove to be extremely useful for readers of all ages.”