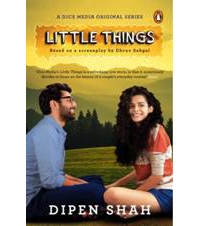 Dice Media has launched its first book, Little Things, in association with leading publishing house, Penguin Random House India. While the norm is to see books being adapted into movies and series, in a interesting role reversal, a web-series is being transcribed into a book. Little Things is a love story starring hugely popular digital actors Dhruv Sehgal and Mithila Palkar. The book is now available in all major online and offline bookstores across the country.
The first season of Little Things released in October 2016 on Dice Media and it was an instant success. The show is one of India’s most popular series to date, witnessing over 400M impressions on YouTube, close to 70M reach on Facebook and more than 32M views cumulatively on the series. The book version of this series further reveals hidden nuances of the internet’s most-loved couple Dhruv and Kavya’s simple yet charming relationship, making it a heart-warming read.
The show stars Mithila Palkar (Kavya), a rising star in India’s digital entertainment space and an upcoming Bollywood actress, and the multi-faceted writer-actor Dhruv Sehgal (Dhruv). Little Things chronicles the life of a gen-next couple in a live-in relationship in Mumbai, trying to understand their individual selves as well as decoding their bond of, love and friendship. This highly engaging, 5-part series shows how the lead characters, Dhruv and Kavya come together to deal with their adversities, circumstances, and misunderstandings; and how they enjoy their highs and tackle the lows. Because after all, love is in the little things.
Aditi Shrivastava, Co-founder of Pocket Aces says, “Little Things has received so much love from the Indian audience. The book captures in prose Dhruv and Kavya’s sweet relationship. We are deeply excited for our audience to experience the show as a book, especially those who love reading!”
Vaishali Mathur, Executive Editor and Head of Language Publishing Rights, Penguin Random House India says, “Within a day of its launch, the Little Things book climbed to #1 in the romance and fiction category on Amazon and has moved 10 ranks higher to become #12 in the all books category. The numbers show how much people love this show and are excited to consume it in different formats.”
Dice Media has also announced that the second season of Little Things is due very soon.
About the Author
Dipen Shah was born in Mumbai and spent most of his childhood in Doha, Qatar. He started working as a copywriter after completing his bachelor’s in media and communications. Later, he wrote content for Indian Premier League (IPL) teams like Royal Challengers Bangalore and Kings XI Punjab before moving to Pocket Aces as a social media manager. Dipen loves comedy and hopes to become a comedian someday. He is also a hopeless romantic. He lives in Mumbai.