Vice President of India, Mr. Venkaiah Naidu launches book, “Not Many, But One” 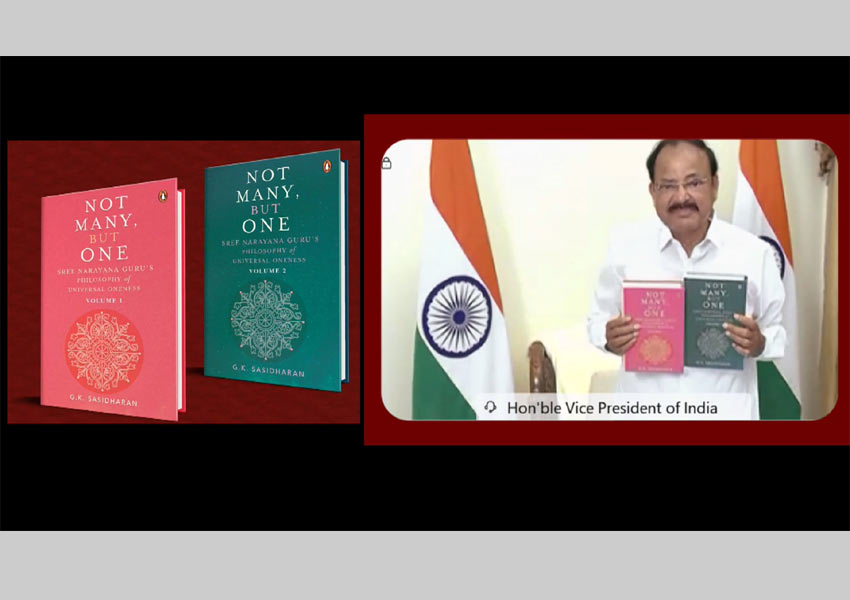 Honourable Vice President of India, Mr. Venkaiah Naidu digitally launched “Not Many, But One – Volumes 1 & 2”, authored by Prof. G.K. Sasidharan, published by Penguin Random House, yesterday. The book, a tribute to Sree Narayana Guru’s sublime poems, has been translated in English from Sanskrit, Malayalam and Tamil by the renowned physicist and philosopher. Echoing the consonance between physics and philosophy, the books are an effort to deep dive into Sree Narayana Guru’s philosophical and literary works.

With his opening remarks at the digital launch, Mr. R. K. Krishna Kumar, Padma Shri recipient and Trustee, Tata Trusts, emphasized, “The book authored by Prof. Sasidharan consists not only of the Guru’s poems written in Sankskrit, Tamil and Malayalam and translated in  English but go beyond as comprehensive commentary on each poem and their philosophical meanings. Prof. Sasidharan plunges straight to the core of the mystical vision of the Guru, the ultimate nature of reality and the oneness of the universe in the book, weaving an extraordinary reason for the philosophical foundations of quantum physics and cosmology. It has been a privilege for Tata Trusts to be able to sponsor this book and we extend our heartiest congratulations to Prof. Sasidharan for his accomplishment.”

He then invited the Chief Guest, the Honourable Vice President to unveil the book.

Speaking at the launch, Mr. Venkaiah Naidu, Vice-President of India said, “Sree Narayana Gurudev was a multifaceted genius, a great Maharshi, an eloquent proponent of Advaita philosophy, a talented poet and a great metaphysician. He was at the forefront of the temple entry movement and against the social discrimination of untouchables. Books like these can contribute to a deeper understanding of the roots of India’s civilizational values and provide a glimpse of the extraordinary universality and breadth of Indian vision. This book will help the present and future generations to appreciate the soul of India and become more aware of their inheritance. No country, no nation can move forward by forgetting their inheritance. That is why culture, nature together make for a better future.”

Prof. G.K. Sasidharan speaking about how his book highlights Sree Narayana Guru’s efforts towards bringing the spirit of Advaita at par with developments in modern cosmology and said, “His literary works showed significant co-relation between the results and discoveries of physics and modern cosmology. At present, the biggest question of “Who Am I?” remains unsolved by science. Most of the modern scientists share the courtesy to answer these questions by saying, “we are not going to get answers to these questions now or anytime in the future.” But, in spirituality, especially in Vedanta, these answers are found in a unique substratum where everything, the universes, all living beings in space originate from a single point known as “absolute consciousness”. This encourages modern scientists to think of it as a combined effort to spirituality, to arrive at the “Theory of Everything”.”

Prof. G.K. Sasidharan, with “Not Many, But One” brings to foreground, Sree Narayana Guru’s foresight of the universe’s singularity.