The Times of India, the world’s largest selling English daily, announced the launch of ‘Write India’, a platform to promote writing talent in India and discover the next generation of writers at the grand launch of Times Literary Fest-Delhi. Write India is India’s largest crowd sourced platform to help aspiring writers realize their dreams.

Each month, one of the mentors (writer of the month) will write the preface of a short story and then it will be open to the aspiring writers to complete the story. The judges will select the top three story writers of the month. The mentor will guide the selected writers and select one short story as the winning one.

Later, the selected budding writers will take part in a workshop with their mentors to further hone their writing skills. The 11 short stories written as part of Write India will finally culminate into a book, published by the Times of India group. Apart from a published book featuring their name, winners of Write India will also win a Kindle.

Renowned author of the ‘Shiva Trilogy’, Amish Tripathi says “Some people joke that India has more story tellers than there are people to listen to them. Times of India, with its Write India initiative, will lend a voice to everyone who needs a platform for their stories to be heard!”

“I think any initiative that enters into the deepest desires of people who haven’t done it before. It doesn’t matter whether there will be great writers coming up or not but that times of India is letting people live their fantasy of becoming writers.” says Rahul Bose.

“We believe in bringing the voice of an individual to the world by giving them new ways to express themselves. Write India, India’s largest crowd sourced writing platform will help aspiring writers realize their dreams under mentorship of leading Indian authors .” Pratik Mazumder, VP- Marketing, Times Internet.

Speaking at the occasion, Vinita Dawra Nangia, director, Write India, said, “Write India is an opportunity of a lifetime for aspiring writers who will get to share this dream platform with some of India’s most successful authors.”

To popularize “Write India”, Times of India plans to reach out to aspiring writers in colleges, bookshops as well as on social media, web and print media. The Write India initiative will open for their first round of write-ups on 7th July 2015. 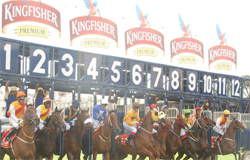 The Epic Kingfisher Derby is back!
MediaInfoline Jul 09