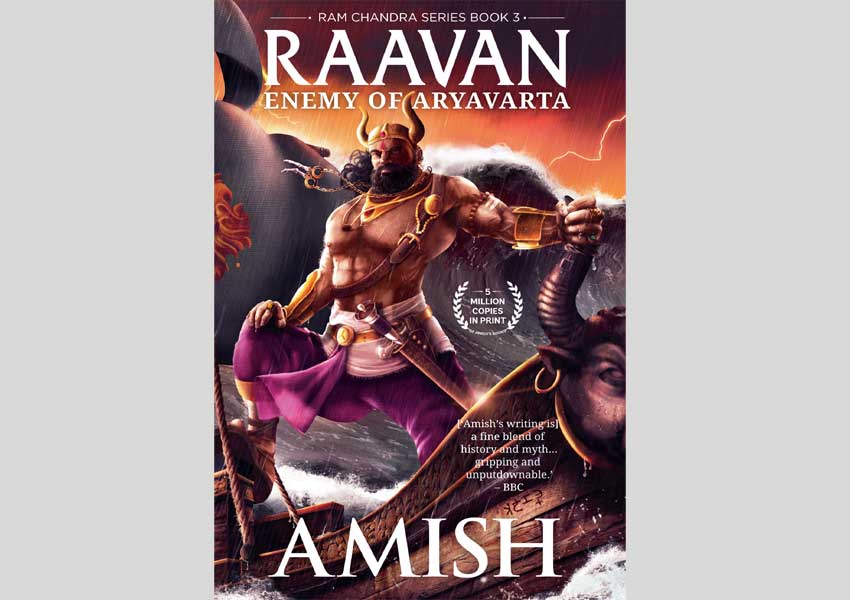 Celebrated author Amish unveiled the cover of his much-awaited 3rd book of the Ram Chandra Series – Raavan-Enemy of Aryavarta. The cover was unveiled via Facebook livestream at Crossword (Juhu) in Mumbai as the author engaged in a conversation with popular director, Zoya Akhtar. Published by Westland, the book is slated to hit the stores on 1st July, 2019.

At the launch, Amish and Zoya indulged in a riveting conversation about how Amish’s book Raavan will be different from the modern view of him, and closer to the more ancient versions. Through this book, Raavan-Enemy of Aryavarta, Amish will chronicle the tale of Raavan, a pirate, a scholar, a warrior, and a king. And will explore that most interesting question: Was Raavan history’s greatest villain?

Examining the complex nature of the book, Amish said, “I have followed a narrative structure called the multi-linear narrative for the Ram Chandra Series. So book 1 of the series, Ram-Scion of Ikshvaku, told the story of Lord Ram from his birth to the kidnapping of Lady Sita. Book 2, Sita-Warrior of Mithila, chronicled the tale from the birth of Lady Sita to her kidnapping. And the 3rd book, Raavan-Enemy of Aryavarta, tells the tale from the birth of Raavan to the kidnapping of Lady Sita. All these 3 narratives merge from the 4th book onwards. It’s a complex structure, but it helps you gain a deeper understanding of all three principal characters of the series. And I think my readers like complexities!”

Delving into the representation of Amish’s Raavan, Zoya Akhtar said “We grew up knowing the story, hearing the story of Raavan from the TV serials, so it was very interesting for me to hear what Amish has to say. He said that there is a lot of depth to this character. Because when you have such a strong hero as Lord Ram, you end up having a strong persona opposing him as well. So Raavan will also have to be strong, but in a different way.”

Raavan-Enemy of Aryavarta is the third book in Amish’s Ram Chandra series after Ram-Scion of Ikshvaku and Sita-Warrior of Mithila. The Ram Chandra Series is the second fastest-selling book series in Indian publishing history. Before this, Amish had written the Shiva Trilogy (Immortals of Meluha, Secret of the Nagas, and Oath of the Vayuputras), which is the fastest selling book series in Indian publishing history. Amish has also written a non-fiction book called Immortal India. All of Amish’s books together have over 5 million copies in print.

Readers can pre-order their copy of ‘Raavan-Enemy of Aryavarta’, or purchase Amish’s earlier books, from Crossword, Amazon.com, Flipkart.com, and other online and physical stores.

Launch of the book Where Kindness Spoke by Shivani Arora