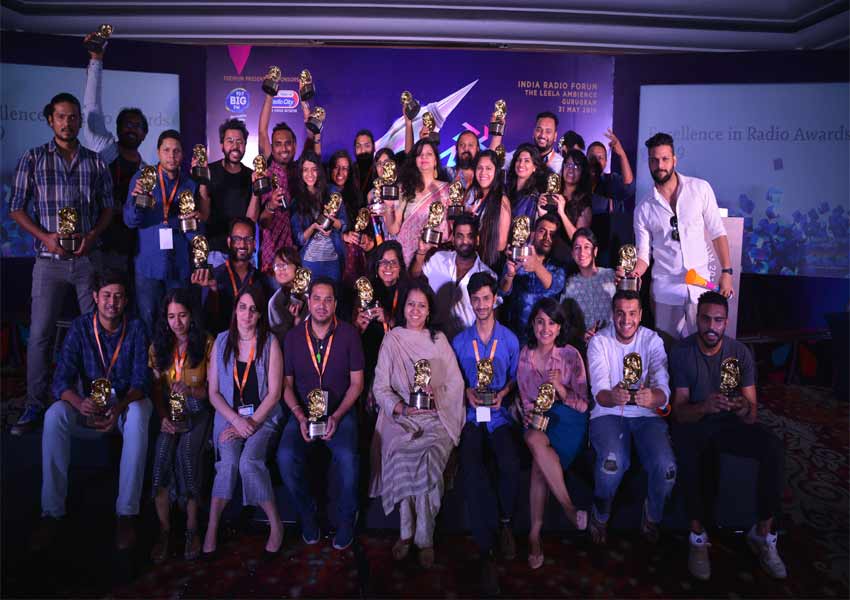 The India Radio Forum 2019 hosted its 14th edition of Excellence in Radio Awards (ERA) in the midst of grandeur and splendid works presented by the Radio industry.

An interesting session which kept the audience engaged in the conversation was ‘Storytellers in Audio – From Radio to Podcasts’ was led by – Indira Rangarajan, National Programming Head – Mirchi Love, Radio Mirchi. The panel consisted of Kavita Rajwade, Co-Founder, Indus Vox Media (IVM), Riya Mukherjee, Founder, RMWP and Soela Joshi, Business Director, BIG FM. The panelists shared their opinions and insights on the power of storytelling. The trio also spoke at length about podcast, the new format gaining traction among masses and brands and how impactful medium it is for storytelling.

The summit concluded with the most awaited session ‘Influencer Marketing -The Game changers That Weave Magic Through Their Stories’, with storytellers themselves.  Moderated by Akash Banerjee, Co-Founder, NAB Digital Media & Host, The DeshBhakt, the panel witnessed the most celebrated RJ’s of the capital city RJ Ginnie, Radio City, RJ Naved, Radio Mirchi, RJ Raunac, Red FM and the very own Khurafati RJ Nitin, BIG FM.

Speaking about the industry, Abraham Thomas, CEO, BIG FM said, “We have been associated with the forum from the beginning. It’s been 14 years of IRF and this journey has been great so far. There was an interesting session on the unified measurement system in this edition, which I specifically liked. I like the honesty with which the issues were debated and discussed. I am really hopeful that we will move forward quickly on unified measurement front.”

Speaking about the Radio industry and the need of a unified measurement system, Nisha Narayanan, COO of Red FM Network said, “The reason as to why we aren’t coming up with a unified measurement system is because each one of us comes with our own agendas and interests. As an industry, we need to come together, revive conversations that look towards finding out solutions and work towards propelling the industry to further growth. We have seen much larger investments by brands into radio stations the moment we give them more data. It’s not that brands do not believe in radio as a medium, but they are sitting quiet and waiting for the industry to produce research of their own and convince them about the impact of radio. If we are coming up with a unified measurement system, it should be the only measurement system for radio which should be out there. From an acceptance point of view, be it government bodies, agencies, clients, everybody has to be welcoming of it being the one and only currency for radio.”

Sanchayeeta Verma, Senior Vice President, Wavemaker who was the part of Radio’s Dilemma said, “IRF is a great forum to connect all stakeholders to both discuss and iron out bottlenecks that are there in the industry, as well as understand the new developments that are out there which we need to be cognizant about. It was great participating in today’s event.”

Indira Rangarajan – National Programming Head for Radio Mirchi’s second frequency, Mirchi Love said, “Storytelling in audio is an art form that needs a lot more nurturing and investment in quality writers, voices and audio designers. We should be experimenting a lot more and not just restrict ourselves to fiction.”