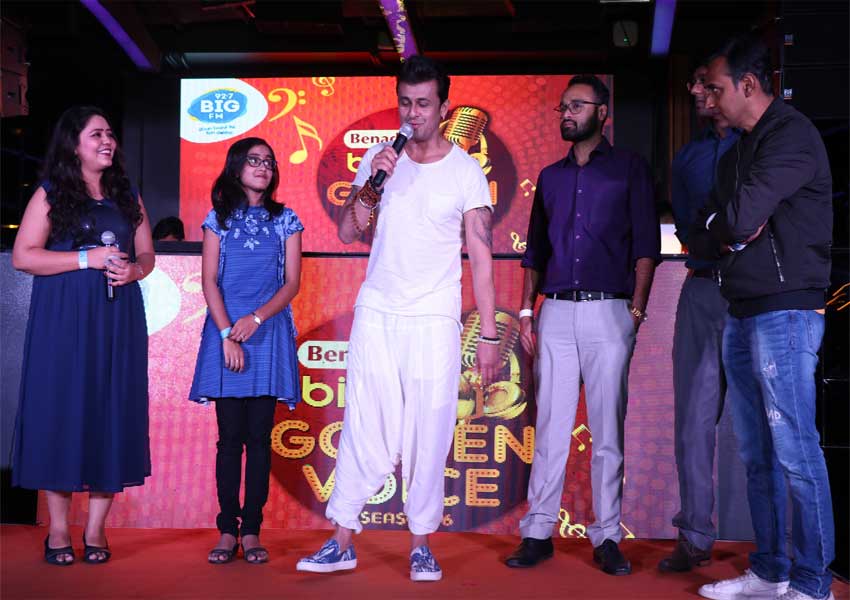 BIG FM announced Monali Dalvi from Baroda as the winner of its most coveted on – air singing talent hunt show Benadryl Big Golden voice Season 6.  The finale was judged by one of India’s biggest singing sensation Sonu Nigam, who apart from being mentor to the contestants was also the national judge at the event. The contestants went through rigorous assessment by the jury which helped them put together a spectacular performance.  Monali Dalvi with her stunning voice pipped competitors to emerge as the winner of the singing reality show.

Hosted by BIG RJ Dilip, the event also witnessed Sonu Nigam motivating the contestants by sharing some tips and boosting their morale. The talent hunt sought participation from across the country, urging people to come forward and showcase their singing prowess. The participants were selected through multiple rounds, with the local station level auditions taking place first to select city-wide winners. The winners across cities then competed for the title resulting in the most deserved one being crowned as the ultimate winner of the title at the grand finale today.

Manoj Lalwani, Chief Marketing Officer, BIG FM stated, “Benadryl Big Golden Voice is one of the most-loved properties of BIG FM and it gives us great pleasure to have seen the 6th season of the show conclude on such an exciting note. We would like to congratulate all the finalists for giving a tough fight to one another and putting all their heart into it. We would also like to thank Benadryl for their continuous support throughout this journey. We hope to achieve many more milestones together, while giving a platform to the much deserved talent.”

On concluding the finale, Ameet Pai, Franchise leader, Benadryl India said, “It has indeed been a memorable journey with BIG FM for the past six years. Benadryl is proud to be associated with the show where dreams come alive for the young singing talent. At Benadryl we believe that a cough shouldn’t rattle you, especially in important moments like these when you are about to sing at a prestigious event -we just want the charismatic voices to be their best.”

National judge of Benadryl Big Golden Voice and celebrated singer, Sonu Nigam said, “I never think that I have judged something; it’s been many years since I have been doing this at different platforms. I have seen many generations come and go. It feels really great to see journey of different people and it helps us learn the dos and don’ts about a lot of things. I believe music should not just be a profession; it should be a way of life. I wish the very best to these young and talented voices. It is because of their sheer hardwork that they are here today.”