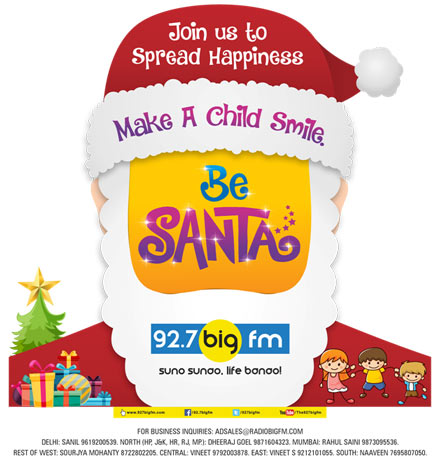 BIG FM, one of the India’s largest radio networks has launched the 2nd season of its highly appreciated social initiative BeSanta for Christmas. The radio network last year seeded the thought of spreading joy among the underprivileged kids during Christmas by inviting donations in the form of gifts from citizens. This year, BIG FM takes a step further by sensitizing the listeners about the overall importance of self-contribution for social causes and promoting the idea of giving and sharing. Well known social-activist and wife of Honourable Chief Minister of Maharashtra Devendra Fadnavis, Mrs. Amruta Fadnavis has come on board to launch the campaign and lend her immeasurable support.

BIG FM will help shape opinions of the listeners for charity by speaking about various thought provoking situations on-air and through social experiments on-digital. It will include situational examples were people generally tend to splurge more but hesitate to contribute even a fraction of that value for a cause. Video showcasing similar scenario will be promoted on digital platforms of the network reaching out to a large audience base in turn generating maximum impact. The campaign will also involve participation from celebrities on-air encouraging the citizens to come forward and support the noble initiative by doing charity.  BIG FM has also associated with crowd funding platform Milap Foundation to raise funds for the cause which will be generated through the entire sequence of activities executed on-air and on digital platforms. The collections will be donated to partner NGO Angel Xpress Foundation in Mumbai and other similar NGOs across the country. Angel Xpress enables mumbaikars who want to give their valuable time by volunteering to educate children. This Christmas be generous with your time and help Angel Xpress. http://angelxpress.org/

Speaking about the 2nd edition of the social initiative, spokesperson from BIG FM said, “We at BIG FM aim to be a strong initiator of change through innovative campaigns that resonate with our audiences. Through such activities, our constant endeavor is to spread the positivity of sharing and donating to the underprivileged section of the society. We aim to witness maximum impact for the campaign through combined large reach of our network across 61 cities on-air and on digital platforms.”

Speaking about leading the campaign, social activist Amruta Fadnavis said, “The concept of Be Santa is a well-thought-out initiative to achieve the desired objective of promoting charity and spreading happiness among the underprivileged kids. Being a responsible citizen actively involved in working towards social issues, I am glad to launch this noble initiative by BIG FM. The reach of radio in driving such strong messages is aimed to have a great impact among the citizens and I look forward to witness maximum participation from them. Let’s find peace and happiness this festive season by spreading smiles and joy among these children this Christmas.” 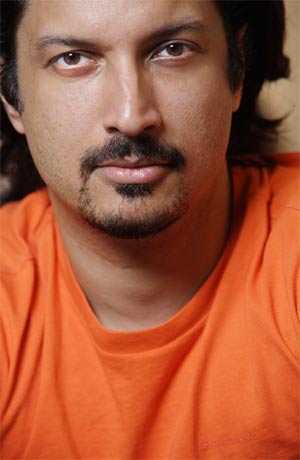