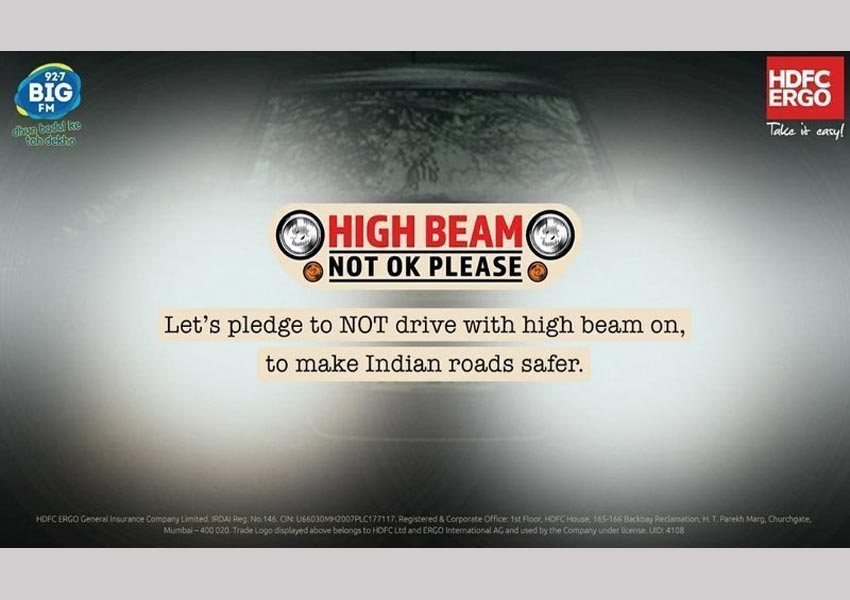 BIG FM in association with HDFC ERGO General Insurance Company announced the kick start of the ‘High Beam – Not OK Please’ campaign. As the flag-bearers of change, the brands have highlighted an issue of the excessive usage of High Beam while driving, which is a huge threat to human lives, becoming the cause of many road accidents in the country.

As per the data published by the ministry of road, transport, and highways, 74% of the vehicles use blinding headlights on highways which are one of the major causes of road accidents. When it comes to road crash deaths, as per the 2017 report, Chennai, Delhi, and Bangalore are the top-3 cities that witnessed maximum accidents while Mumbai is placed on No 7. This is an alarming situation and the campaign tries to sensitize everyone to use High Beam in the right way.

With an endeavor to bring a positive the radio network and HDFC ERGO General Insurance have brought forth the fact that High Beams are the cause of many road accidents in the country. As a part of the campaign, BIG FM RJs will initiate conversations by highlighting and engaging with listeners on the causes of increasing road accidents. Further, with highways being the most affected and to personalize the messaging for the listeners, BIG FM will also install photo booths across prominent dhabas across highways in various cities. As soon as the person is ready to get clicked, a bright light will flash on their face while the camera captures the image. This social experiment will mirror the jarring effect of the high beam from the opposite direction on a person’s vision.

Speaking on the campaign, a spokesperson from BIG FM said, “When we hear the term road accident, we associate it with various reasons like speed, drunk driving, mobile phone usage, etc. But, we hardly think that the use of a high beam can cause accidents too. Through this campaign, we want to change this notion and highlight how this issue is turning out to be one of the key reasons for accidents. We, as a responsible brand, have always tried to inspire the masses to take a relook at situations and imbibe a sense of accountability. We appreciate HDFC ERGO General Insurance for coming forward in support of our campaign and driving this message through their platform as well.”

Mr. Mehmood Mansoori, President – Shared Services & Online Business, HDFC ERGO General Insurance said, “We are glad to be associated with BIG FM for the campaign which is the need of the hour, to create awareness on the misuse of High Beam on the roads of our country. Knowingly or unknowingly, we tend to make the mistake of using high beam while driving without thinking of its effects on the driver of a vehicle coming from the opposite end. Through this campaign, we aim to help people understand the hazards of using a high beam.”

In its next phases, BIG FM RJs will engage with listeners to understand their perspective and also speak to local authorities like – RTO, Traffic Management, Driving Experts and Eye Specialists for an in-depth idea on high beam and its harsh effects, if not used correctly. This awareness will be further spread across BIG FM’s vast networks. ‘#HighBeam – Use it Right’ will be a 360-degree campaign which will run across various platforms including On-air, RJ mentions, Buzz on digital, On-ground activations for direct interaction with listeners, etc.