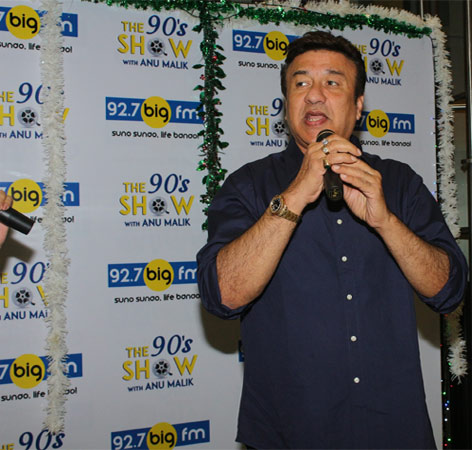 BIG FM, one of the India’s largest radio networks has announced the launch of its new show The 90s Show with Anu Malik. The show’s content revolving around the era of 90s to early 2000s will also mark the radio network’s transition into adult contemporary music format. In keeping with its renewed identity and fortifying its promise of providing more Hit music, the station will offer songs from the said era. The new programming line-up will reflect a fresh and contemporary image which is in line with the changing demands of listeners.

The 90s Show with Anu Malik, as the name suggests, will take listeners back in time when story-telling, music and stardom ruled Bollywood. The ace composer and ever versatile Anu Malik will add credibility to the theme of the show by engaging listeners with trendsetting songs and film trivia from the 90s and early millennium. He will integrate his inimitable quirky and humorous style with the show, driving maximum listener engagement. The offering will air Mon-Fri, 8pm to 10pm across markets.

With the launch of the brand new show, the radio network will also build its music strategy adult contemporary genre at its core. The radio station will accentuate its delivery of the new genre by adding remixes, mash-ups, original songs and more riveting content to the mix. Along with playing upbeat music, BIG FM will keep its intrinsic element by playing songs from the timeless era. At the same time, BIG FM’s extension in the digital realm will continue to offer compelling video content based on original songs. This comprehensive 360-degree approach while appealing to the younger audience will add to the existing listenership pie and increase effective brand presence for the advertisers.

Speaking about the re-positioning, Mr. Atul Razdan, National Programming Head, BIG FM said, “The decision to bring adult contemporary genre across our network is aimed at extending the reach among millennials while maintaining our existing listenership base. ‘The 90s Show with Anu Malik’ makes for an apt platform to announce the launch given its compelling theme that is in sync with the revamped strategy. This newest addition along with the refreshed programming line-up will mean increased audience engagement offering effective visibility to our partners.”

BIG FM has taken aggressively to the path of having a strong digital outreach with fresh content based activities like ‘Recreated Folk’ for Navratri featuring prominent singers like Harshdeep Kaur, Prajakta Shukre, ‘Khushiyon Ki Marathon’ for Diwali, ‘BIG Junior Rockstars’ for Children’s Day, ‘#NoKhaaliPet’ for World Human Rights Day among many others. Original theme based songs were composed and music videos were released on the said occasions that appealed to audiences across ages.

BIG FM with its clutter breaking shows has been instrumental in maintaining a leadership position over the years and this show will further consolidate the ratings. In Mumbai, ‘Breakfast Show with RJ Siddharth’, has led the way in the prime-time band by consistently occupying the number one rating for more than 120 weeks now. The radio network’s coveted win as the ‘Most Admired Radio Station for Customer engagement’ at ACEF awards earlier this year and the recent win at the Emvies 2017 as the ‘Media Partner of The Year – Radio’, adds to its credibility of being the most trusted brand partner.