Radio City becomes a Driver of Change with ‘MatKar’ 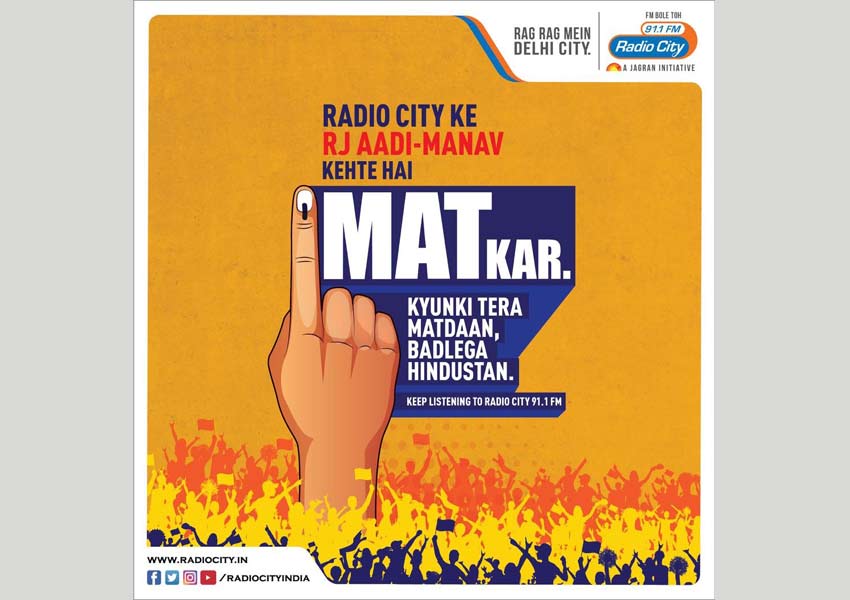 As part of the ‘MatKar’ campaign, Radio City’s RJ Aadi-Manav encourage Delhiites to exercise their right to vote and fulfill their responsibility. With the aim of increasing voter turnout and bringing about a positive change, the radio jockeys with Mr. Ranbir Singh, the Chief Electoral Officer and Mr. Satnam Singh, Special Chief Electoral Officer, educate Delhiites about the importance of voting. Invoking the spirit of national pride, Radio City team visited Kalpa and spoke to the 102-year old Shri Shyam Sharan Negi, the first voter of independent India, who has never missed an opportunity to cast his vote since 1951, to motivate Delhiites to follow in the footsteps of Negi.

Commenting on this campaign, Kartik Kalla, Chief Creative Officer, Radio City, said “The previous general elections in Delhi witnessed a 67 percent voter turnout, suggesting we still have substantial ground to cover to take this figure close to an ideal statistic. Radio City has always believed in the power of radio and with this initiative, we believe radio will play a crucial role of being an influencer for the masses and a catalyst for change. We are confident the ‘MatKar’ campaign will reinforce people’s belief in the importance of voting and help us increase the voter turnout.”

To culminate the voting awareness campaign “MatKar”, Radio City Delhi, has organized a Harley Davidson Motorcycle rally from India Gate to Central Park on Friday, 10th May 2019, 5:00pm onwards, the rally will be flagged off by Mr. Kartik Kalla, Chief Creative Officer, Mr. Satnam Singh, Special Chief Electoral Officer Delhi, Mr. Charanjeet Singh, CEO, Delhi, Sveep and Radio City’s RJ Aadi and Manav. As a part of the event, the team would be giving a demo of the EVM and the latest VVPAT process, thereby informing the voters on the voting process.

Radio City has also created a special ‘MatKar’ anthem to encourage Delhiites to exercise their constitutional right. Extending the campaign digitally, Radio City has created engaging videos on Radio City’s social media handles with prominent stand-up comedians like Gaurav Kapoor, Hasya Kavi Ashok Chakradhar, Arun Gemini and music bands like Astitva and Jashn amongst others, who in their own funny, quirky style urge the Dilliwale to vote.