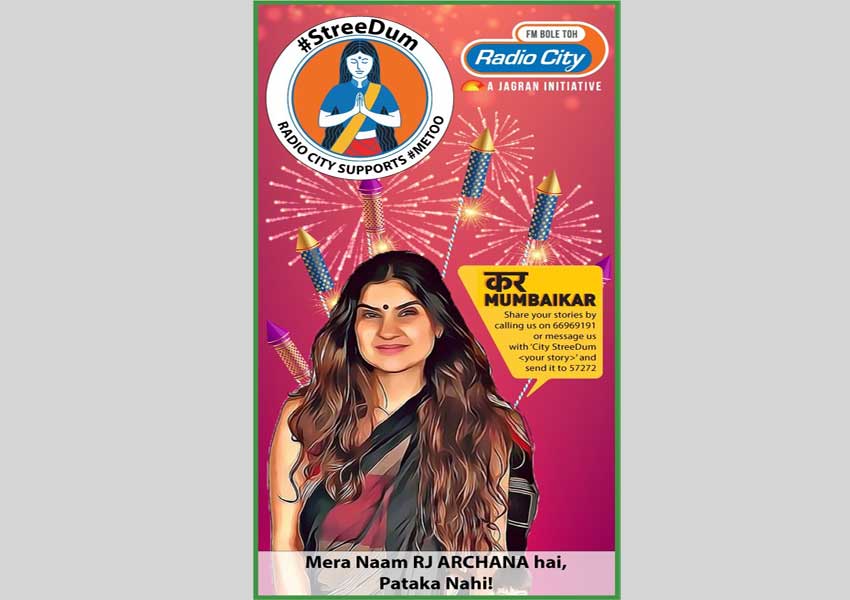 Radio City 91.1FM initiates a week long campaign “StreeDum” in Mumbai, this Diwali to eliminate the objectification of women. The thought behind the campaign is to recognize the widespread and deeply ingrained mentality of the majority in the Indian society that looks at women as objects of sexual gratification alone. The aim of the campaign is to create awareness about this issue and address it on a large scale through Radio City’s Breakfast show RJs Salil & Archana. Radio City’s “StreeDum” is an extension of ‘Kar Mumbaikar’ initiative, which has been successfully utilising the power of radio to influence a positive change in the society. ‘StreeDum’ campaign will run across on air, on ground and on social media.

As a part of the on air campaign, listeners can share their real life experiences with RJs Salil and Archana. Radio City will substantiate these stories on air by explaining how objectification is an unfortunate but every day phenomenon in the life of most women across the world. Through the digital route, Radio City will have experts explaining the various forms of harassment on video and advice the possible legal recourse a person can take if they are facing such a situation. On the backdrop of the festive season, Radio City aims to run a social engagement campaign where the female RJs of the channel will spread awareness against casual sexism.

At the same time, awareness and engagement would be built on ground where Radio City will stage ‘Nukkad Nataks’ with the theme revolving around objectification of women for a week. These nataks will be held at various pertinent locations across Mumbai to educate people about harassment and consent. Alongside, Radio City team will distribute Radio City branded cracker boxes containing goodies and creative content about an ideal way of addressing a woman. The box featuring RJ Archana on a branded cracker box will communicate a strong message, “Mera naam RJ ARCHANA hai, Pataka nahi!”

Commenting on this occasion, Mr. Kartik Kalla, Chief Creative Officer, Radio City said, “With the ‘StreeDum’ initiative, Radio City continues to be a forerunner in tackling social issues and bringing about a positive change. As an extension to the successful ‘Kar Mumbaikar’ initiative we have always aimed at solving citizen-centric problems using the power of radio. Most of us are not cognizant of how unconsciously we perpetuate sexual harassment through seemingly innocuous everyday actions. Each one of us is an agent of change and together we can make a conscious effort to treat women better. I am hoping ‘StreeDum’ an initiative by Radio City will also see a positive response from Mumbai.”

Expressing their thoughts on leading this drive, popular Radio City RJ duo, Salil & Archana said, “We are immensely proud to be spearheading ‘StreeDum’ – an initiative which aims to spread awareness about one of the biggest societal concerns of today – the sexual harassment of women. The Kar Mumbaikar campaign is all about uniting the public and acting as a combined voice against pertinent issues. By extending our support to the #Metoo initiative, we aim to give voice to anyone who has been victimised and needs a platform to share their experience.”

After successfully addressing and solving various issues like plastic ban, monsoon related issues in Mumbai like beach clean- up and filling potholes in the previous leg of Kar Mumbaikar, Radio City is all set to stir the ‘janta’ of Mumbai, urging them to respect women and consciously stop objectifying them with the “StreeDum” campaign.

Radio City Associates with Leading Musical Artists Across the Country