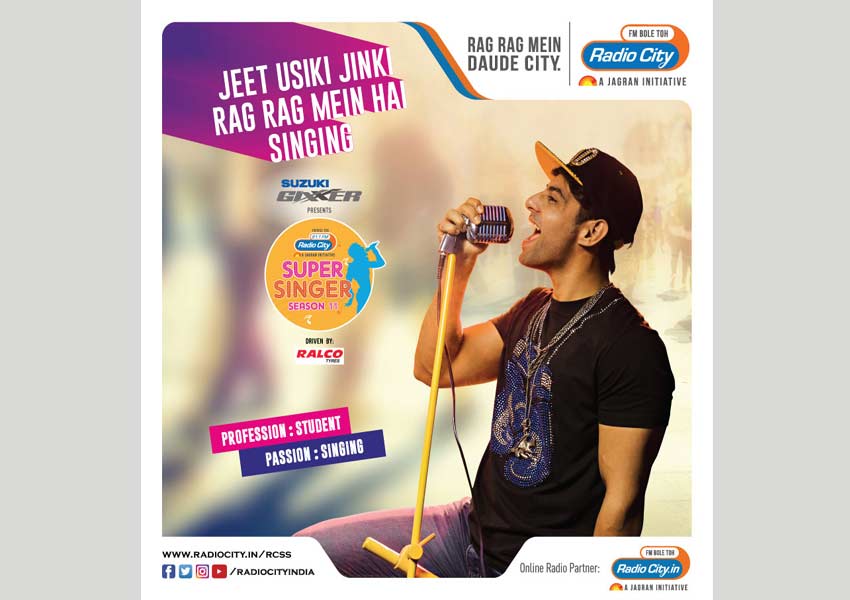 Radio City announces the 11th season of singing talent hunts on radio, Suzuki Gixxer presents Radio City Super Singer. Spreading its wings across 39 cities, the talent hunt has catapulted the dreams of many a talented voice into a successful reality.

The auditions for the 11th season are already underway. To submit entries, participants can walk into Radio City studios or select malls across cities. They can also locate the Radio City branded vehicle moving around or get in touch through Radio City’s social media platforms or the designated landline number. A month long activity, spanning across the audition phase, followed by shortlisting phase will witness 5 best singers indulge in an ultimate battle, where 1 lucky winner from each city will be crowned as the Radio City Super Singer. The winner will be selected on the basis of Jury choice and public voting. The Grand finale in Mumbai will be held on 31st August at Infinity Mall in Malad and the winner will be gratified with cash prize in each city.

Commenting on the launch of the 11th edition of Radio City Super Singer, Radio City’s Chief Creative Officer, Kartik Kalla, said, “In the last ten years, Radio City Super Singer has become a platform for many budding singers to showcase their talent and has reached over 69 million listeners across 39 cities of the country. Radio City’s commitment to constantly innovate for a decade has helped the property evolve into one of the most popular talent hunts of the industry and the country. The overwhelming response we receive every year is a testimony to the scale and engagement driven by the property. This year marks our 11th anniversary and we are certain that we will surpass expectations yet again.”

Expressing his thoughts on Radio City Super Singer 11, the National Award winning singer Sukhwinder Singh said, “India has a bustling pool of talented individuals who are always on the lookout for credible avenues where they can showcase their mettle. Radio City Super Singer is one such well-recognized platform which has been committed to celebrating this country’s immensely gifted singers for the last decade, an incredibly long time which is nothing but a testament of Radio City’s commitment to finding and nurturing talent and helping them grow. I still remember my first time on stage, I was 8 years old and I sang Lataji’s famous song Sa Re Ga Ma from the movie Abhinetri. It’s been over 3 decades since then and my love for music has only grown over the years. I have had a long-standing relationship with Radio City by being the voice of the famous Rag Rag Mein Daude City stationality song. I wish the contestants of this year’s Radio City Super Singer have a similar love affair with music and they hone their skills to become bright superstars of the industry someday!”

To Audition in Mumbai: