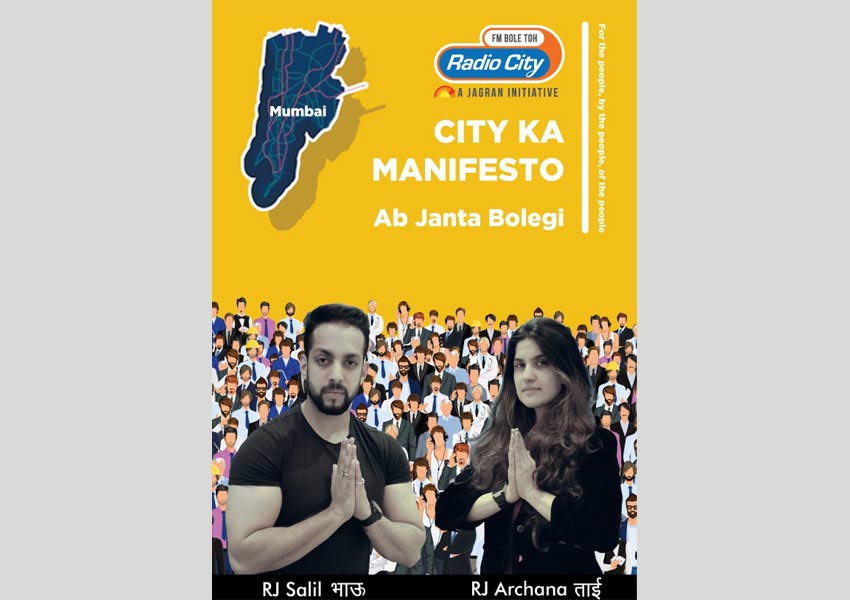 Radio City announced ‘City ka Manifesto’ campaign, the first ever janta’s petition led by Radio City’s RJs Salil & Archana for political parties to consider for the next 5 years. The five-week long activity which kick-started on 22nd March, 2019, aimed to understand the expectations of Mumbaikars from the government and bring it to the notice of the political parties to drive change in the city.

Radio City’s ‘City ka Manifesto’, an extension of Kar Mumbaikar initiative, was spearheaded by Radio City’s RJ Salil and RJ Archana on their popular breakfast show ‘Kasa Kai Mumbai’ broadcasted Monday to Saturday from 7:00 am to 11:00 am. As part of the campaign, RJs urged listeners to voice their expectations from the political parties, to bring about a positive change in the society. Radio City team visited major areas of each of the 10 constituencies of Mumbai, including Navi Mumbai, Thane etc. and compiled queries from every nook and corner, which were updated on Radio City’s digital platform, www.radiocity.in. The collated manifesto was handed over to Mr. Ashish Shelar, BJP President, Mumbai and Mr. Milind Deora, Congress President, Mumbai for further consideration.

In tandem with the campaign, on 18th April, 2019, Radio City’s RJ Salil, RJ Archana, RJ Palak and RJ Karan led the ‘Awaz Uthao Button Dabao’ rally in Mumbai, starting from Bandra Linking road to Juhu Chowpatty, to create awareness about the upcoming elections and urge listeners to exercise their right to vote. The initiative garnered immense support and appreciation from the Election Commission as well as Mumbai Police officials. Bollywood celebrities like Alia Bhatt, Armaan Malik, Varun Dhawan, Parineeti Chopra, etc. have extended their support for the campaign on–air and on social media.

Commenting on the activity, Radio City’s RJ Salil and RJ Archana said, “Choosing the government is one of the most important decisions to make for any citizen, and it is only fair that the politicians understand what we expect them to do, once they are elected to power. With Radio City’s ‘City ka Manifesto’ activity, we wanted to create a janta-led manifesto for the politicians to make it their agenda this time around. We are very excited and hopeful that this initiative will influence substantial change all over the city in the years to come.”

An extension to Radio City’s Kar Mumbaikar, through initiatives like ‘City ka Manifesto’, Radio City continues to leverage the immense power of radio to bridge the gap between the people and the government by driving political awareness amongst the citizens.

Fever Network Is Set To Bounce Back Bharat
MediaInfoline Jul 30

Fever Network Is Set To Bounce Back Bharat