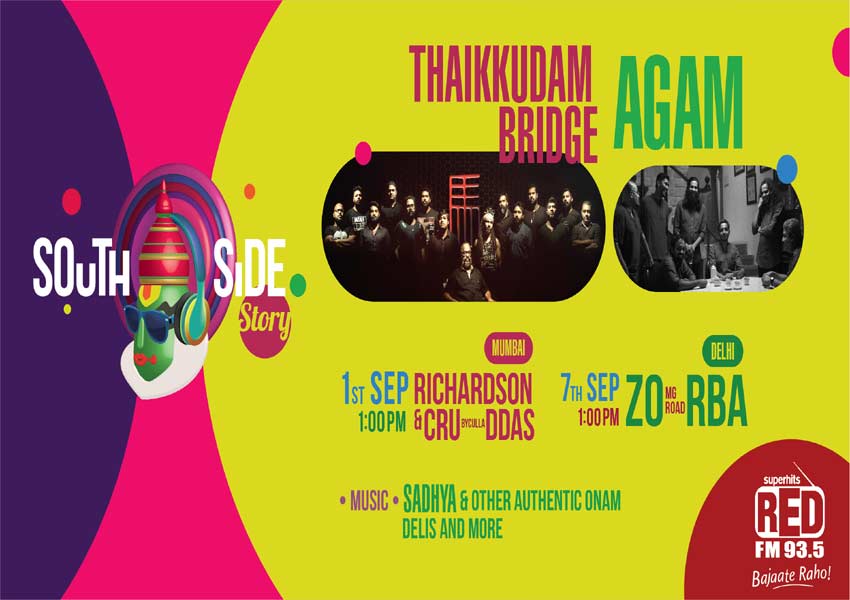 93.5 RED FM announced their new IP, South Side Story, which is an experiential festival that brings South Indian music, cuisine and culture to other parts of India. The event is set to take place in Mumbai and Delhi during the festive time of Onam.

South Side Story is a festival which presents the music, culture and food from Kerala in a very contemporary yet authentic way to both Malayali and non-Malayali community to experience the flavor of Kerala in their own respective cities. RED FM over the last few years has launched many IPs building on the belief that the way forward is to build strong communities and serve them entertainment in a very authentic form through focused & niche IP Events. South Side Story is also an on-ground extension of recently launched initiative of RED FM, RED Indies that promises to support independent music, and give them a platform with an audience who would appreciate their music. By bringing in two of the most popular regional Indie bands, Agam and Thaikuddam Bridge, the festival will be showcasing the best of Carnatic progressive rock, pop and electronic music. The food for the fest is curated by Mahabelly in Delhi and South High in Mumbai.

Commenting on the launch, Nisha Narayanan, COO & Director, RED FM & Magic FM, said, “Through South Side Story, we want to break the barriers that are stopping us to explore regional cultures by providing them a platform. This festival aims to also reach out to the non-South Indian communities who wants to experience the festivities and grandeur of Onam. There has been a drastic shift in the Indian music scenario with more independent regional artists coming forward. RED FM through its initiatives like RED Indies and South Side Story gives a platform that recognizes and nurtures regional musicians. It is our humble effort to bring like-minded people together to experience sights, sounds and sadhya from the magnificent land of Kerala”.

RED FM with a nationwide presence has always believed in the power of regional. With initiatives like, South Side Story, RED FM will empower regional communities and independent artists by putting them forward with an access to a diversified audience.

The event will take place in Mumbai on 1st September at Richardson & Cruddas and on 7th September in New Delhi at Zorba. The tickets for the event will be available at BookMyShow.com from 1st August, 2019.