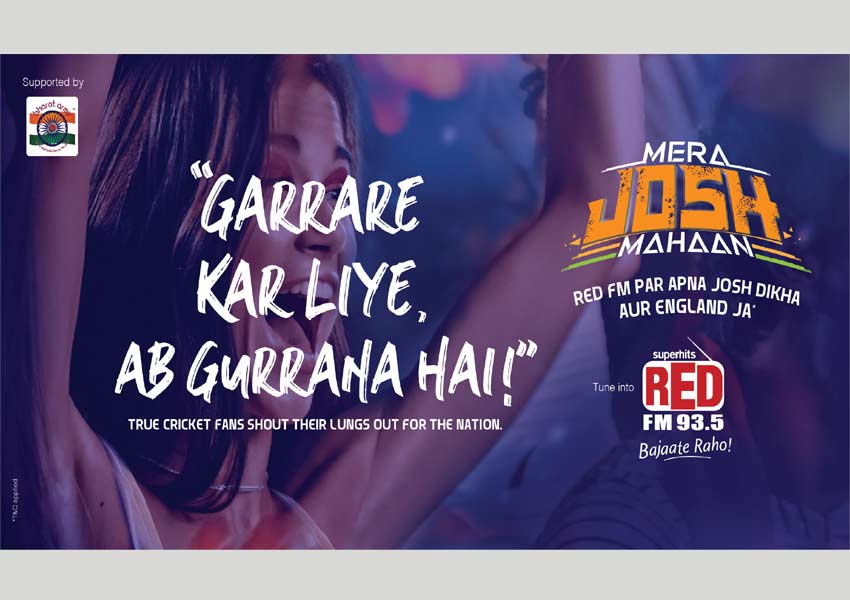 The campaign will be executed in more than key markets across the country with 45 days of nonstop ‘JOSH’. Keeping the passion of the World Cup alive, RED FM created an energetic anthem capturing the emotions of cricket fans. The josh anthem has been composed by RED FM team and leading Bollywood singer, Divya Kumar was roped in for vocals.

On the campaign ‘Mera Josh Mahaan’, Nisha Narayanan, COO, RED FM said, “India is a nation where cricket is more like a religion. At RED FM, we always strive to create some very differentiated & engaging content for our listeners. Cricket over the years has always united fans and radio has been a crucial part in bringing the fans together in cheering for Team India. We are thrilled to partner with The Bharat Army who have been passionately following the Indian Cricket Team around the world.”

In a one in a million opportunity, RED FM will be running a slogan contest to give a chance to 12 lucky fans across India to go to England on an all-expense paid trip. In this exclusive chance, enthusiastic cricket fans can participate and win the opportunity to cheer for the Indian cricket team in England.

Additionally, RED FM will also be hosting the following activities on-air for their listeners: