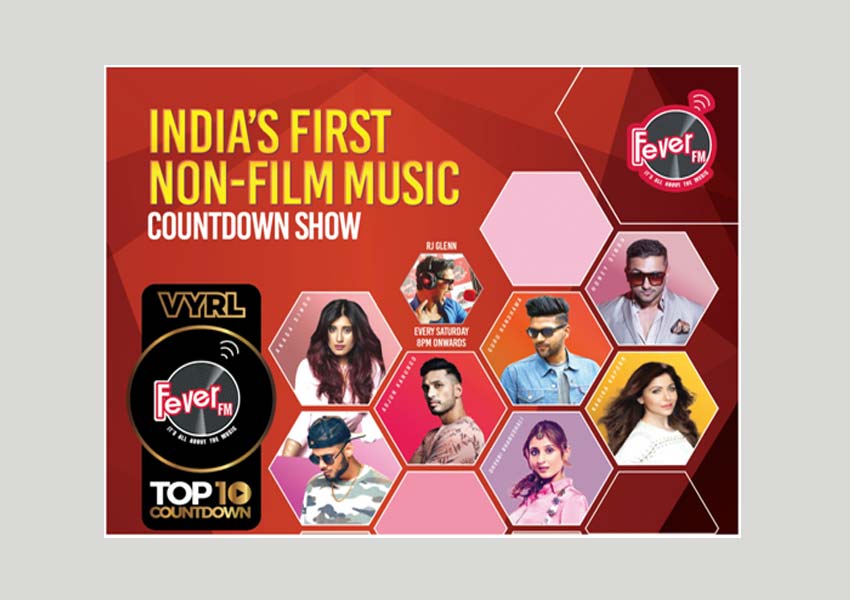 VYRL FEVER TOP 10 is India’s first non-film countdown radio show designed to encourage and promote non-film artist and their music. The one hour show which airs on Fever FM 104 and MY FM across 43 Markets, launched on 19th January’19 with the idea of enabling music labels & artists to create and release their non-film music.

The countdown is an amalgamation of music from different genres. Every week the countdown is interestingly curated depending on new song introductions and also by measuring the popularity of the already released tracks. The show has completed 19 episodes and is widely accepted by the audience, creating a buzz in the music arena.

The bigger idea is to present an assorted mix of tracks by non-film artists who may or may not have reached listeners otherwise. The countdown  has songs from artists like Harrdy Sandhu, Arjun Kanungo, The Yellow Diaries, Akasa, Yash Narvekar,The Doorbeen Boys, Darshan Raval, Euphoria, Naezy, Raftaar, Brodha V, IKKA, Guru Randhawa and Dhvani Bhanushali to name a few.

Talking about the innovative show, Harshad Jain, CEO – Radio and Entertainment, HT Media Ltd. said, “Fever FM has been the pioneer of music innovations on radio with path breaking initiatives such as 40 minutes non-stop music in prime time, Fever Unplugged that promotes Bollywood and independent music and Guzzler that presented Ghazals in a modern avatar with contemporary singers. We are very pleased to partner with VYRL to bring another music innovation that promotes independent music – VYRL Fever Top 10. Independent music is on the rise with many artists gaining stature and mass followership. With thislong-terminitiative, Fever FM will continue to carry the torch of innovations in music space on radio.”

Sharing his thoughts singer and song writer Arjun Kanungo shares “This is a great initiative. VYRL FEVER TOP 10 music countdown show can now reach various cities. It is a great platform for artist like us who have their audiences spread across the country. VYRL FEVER Top 10 is sure to be one of the most sought after non-film music countdown show and I am looking forward to my music being on the charts.”

Sharing his thoughts on the same Darshan Raval who was on one of the episodes says “I congratulate VYRL & FEVER FM for such a great initiative. Since I personally love and support independent music, VYRL FEVER TOP 10 has helped n supported my songs to reach out to my audience across the country.

I am very excited to be a part of the VYRL Fever Top 10 show and look forward to sharing my melodies directly with my audience”.

Harrdy Sandhu adds, “With VYRL FEVER TOP 10 show there is a lot of new music showcased. Today with a platform like this we are sure to have more artists coming up with new music since we have an immense pool of talent and with this show every independent artist will get a chance to showcase their music.”

In sync with the same rapper Ikka shares “Audiences today have a plethora of music options due to technology which is both a boon and bane for independent artists. However a show like this on a mainstream radio channel will definitely give an added boost to for independent artist. It is a platform for us to share our creations directly with listeners which is otherwise a challenge as they are part of films and thus have a limited outing. The show has been interestingly put together and this is surely very exciting.”

Glamour Gurgaon announces its winners of Mrs. Delhi-NCR 2019
MediaInfoline May 29