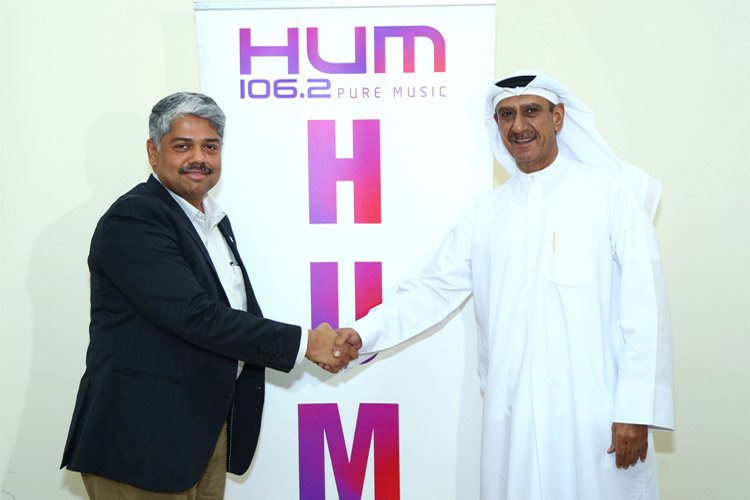 India’s leading content conglomerate, Zee Entertainment Enterprises Limited (ZEEL) today reached another major milestone by announcing its foray into Radio with the acquisition of UAE’s first and leading Radio station, Hum 106.2 FM. ZEE now becomes the only entertainment network in the region to provide an extensive media solution to its partners through Television, Radio, and Digital.

After being a pioneer with the launch of India’s first Hindi Satellite channel, Zee TV in 1992, Zee Entertainment was the first to launch a Bollywood TV channel, Zee Aflam in 2008 for the Arab audience as well introduce the Arab world to Hindi programs dubbed in Arabic with Zee Alwan in 2012.

Speaking on this significant acquisition, Amit Goenka, CEO – International Broadcast Business, ZEEL said, “In our journey of over two decades, ZEE has always led the industry in its evolution and transformation. At ZEE, we are always looking at strategic acquisitions across the globe to increase our footprint and market share in the entertainment industry. Radio has been an area of interest for ZEE for quite some time and after extensive planning and studying of the brand values, ratings and revenue generated by various stations, we felt that an investment in Hum FM was the best option. Hum FM has a legacy of almost two decades and with a current market share of 26%, it is the top Hindi radio station in the UAE. ZEE is confident that it can leverage its very strong South-Asian brand connect onto Radio, and offer a synergy of Television, Radio and Digital that could revolutionize the entertainment industry in the UAE.”

“We are excited about our new business ventures. Radio comes immediately after our foray into film production and distribution where movies like ‘Rustom’ and ‘The Flying Jatt’ have done extremely well globally and specifically in the UAE and Middle East markets. The acquisition of Hum FM in UAE is a step in that direction and we are upbeat about its prospect in the coming years;” Amit further added.

Commenting on ZEE’s plans for the region, Mukund Cairae, CEO – MENA and APAC, ZEEL said, “This move is a diversification to our entertainment business portfolio, adding to the numero uno position we possess in Television among South Asians in the Middle East. This investment also shows our commitment to the region and its business landscape. Now we can offer media across Television, Radio and Digital platforms, leading to a great synergy between content and mediums. With an extensive library of music content that includes singing reality shows like ‘The Voice India’, ‘SaReGaMaPa’, ‘Antakshari’ and ‘Asia’s Singing Superstar’ which have produced great singers in Bollywood, an on-going relationship with the big names in the industry and with one of the biggest music labels in Bollywood, Zee Music Company as a part of its portfolio, the new venture has all the ingredients needed to redefine the Radio industry in this market.”

His Excellency Ali Jasim Ahmed, General Manager of Umm Al Quwain Broadcasting Network (UBN) said, “We are proud to partner with Zee Entertainment, the leading global company in the media industry with a strong presence in the UAE and across the Middle East. Zee Entertainment will provide new content and concepts in the world of entertainment and marketing, and will provide the station the required media expertise of a highly effective and competitive value. Further, we will give all the facilities and backing for ZEE to achieve its strategic station goals and we will work together to support the qualitative superiority of the programs in order to meet the wishes and aspirations of the esteemed listeners.”

106.2 Hum FM was previously owned and operated by Shamal Media Services. The station is a frequency originating from the emirate of Umm Al Quwain and forms a part of Umm Al Quwain Broadcasting Network (UBN). The frequency was one of the first Hindi and Urdu language frequencies to hit the UAE airwaves in the 1990’s. It redefined drive time and boasted of many celebrity Radio Jockeys. It also went on to popularize live cricket commentary on radio and has a lot of pioneering firsts in the radio business.

Shahid Jamal, Founder & MD, Shamal Media Services said, “Hum FM pioneered FM Radio in UAE and over the years, we have made it the No. 1 Radio Station. It is now a great opportunity for us to hand over our successful radio legacy to a media network that has been a pioneer of South Asian entertainment globally and in the region. Zee Entertainment, who themselves have had a great legacy in the media business will only take the success of Hum FM to the next level.”

New and strategic investments in media and related businesses have always been at the forefront of ZEE’s business strategy. The addition of UAE’s first Hindi Radio station to its bouquet of TV channels makes Zee Entertainment one of the strongest players in the UAE’s entertainment space. More announcements are expected in the coming weeks on the future channel programming and its positioning.