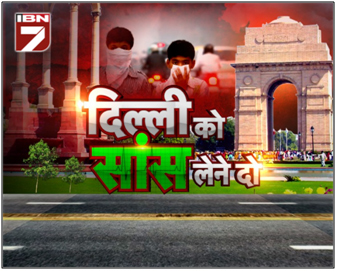 New Delhi is amongst the cities with the most polluted air in the entire world. As the country’s capital gasps for cleaner air, IBN7 will launch a special initiative – ‘Dilli Ko Saans Lene Do’ on the deteriorating air quality in the city.

While the discussions and the raging debates on the rising pollution are not new, the recent measures announced by the state government is the strongest official response yet to Delhi’s worsening air pollution problem. Keeping in line with the commitment to bring forth the stories that affect the viewers, IBN7’s special campaign – ‘Dilli ko Saans Lene Do’ will not only be a platform for discussions about the alarming situation but will also provide a reality check on the latest measures taken by the Delhi government.

Starting from 22nd December, IBN7, in the first phase of the campaign, will have detailed discussions about the need and the impact of the measures proposed by the state government to curb the rising pollution levels in the city.  In the second phase, from 1st January to 15th January, the channel will do a reality check at various locations across the capital, evaluating the impact of the steps taken on air pollution and providing a clear picture to its viewers.

Speaking on the campaign, Sumit Awasthi, Managing Editor, IBN7, said “The air pollution levels in Delhi have spiralled to alarming levels – literally choking the citizens of the capital. As a channel we have always believed in pushing the envelope when it comes to issues that directly impact people and it is this commitment that has spurred us to launch this campaign which we will run for close to a month. ”

Watch ‘Dilli ko Saans Lene Do’ daily from 22nd December, 2015, through the day, exclusively on IBN7.