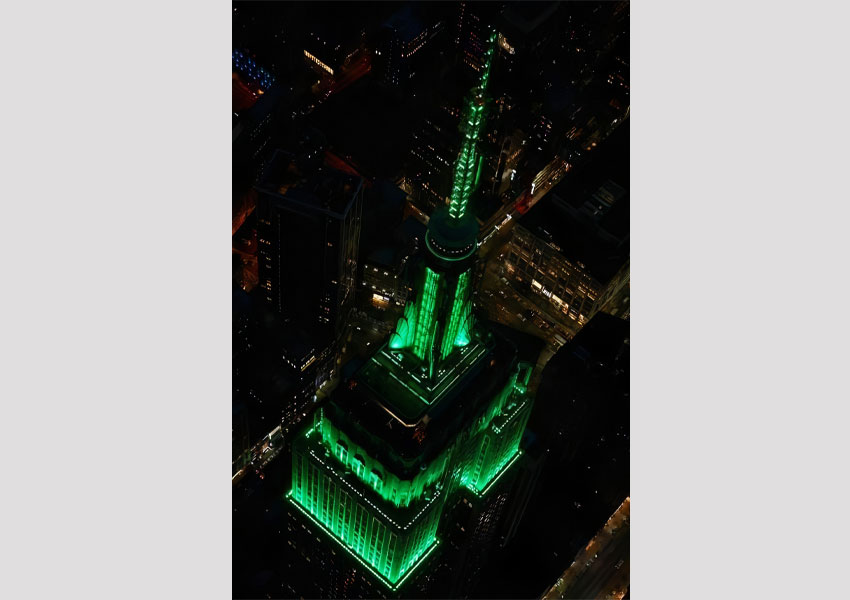 The Empire State Building (ESB) illuminated the New York City skyline with a light show synced to New York legend Billy Joel’s brand new recording of Miami 2017. As part of the surprise finale to Robin Hood and iHeartMedia’s “Rise Up New York!” virtual telethon, the light show was simultaneously broadcast on all New York City TV stations, iHeartMedia and Entercom broadcast radio stations, News 12, Spectrum News NY1, SiriusXM and nationally on CNBC. In partnership with iHeartMedia, Robin Hood, and the piano man himself, ESB debuted not only a brand new lighting spectacle but an exclusive video that viewers can now enjoy via the Building’s YouTube page.

Robin Hood, New York’s largest poverty-fighting organization, is amping up its efforts to provide recovery and relief to the organizations that serve the city’s most vulnerable. Together with Billy Joel, ESB created the show as a call to action, to inspire those who can to donate to help New Yorkers rebuild their lives after being drastically impacted by the COVID-19 crisis.

“The Empire State Building is honored to work with Billy Joel, a music icon synonymous with New York, to bring attention to Robin Hood,” said Anthony E. Malkin, Chairman and CEO of Empire State Realty Trust. “ESB annually lights for Robin Hood’s fundraiser, and we are excited to partner with our friends at iHeartMedia to bring even more attention to the great work this organization accomplishes.”

“Robin Hood’s Rise Up New York! benefit was a moment to recognize the incredible resiliency of our fellow New Yorkers, who continue to come together in the fight against this pandemic, culminating in a Billy Joel performance set against the backdrop of the iconic Empire State Building flashing green for Robin Hood,” said Wes Moore, CEO of Robin Hood. “It’s an honor to continue our meaningful partnership with the Empire State Building to shine a light on our work and show our neighbors every night this week that we stand shoulder-to-shoulder together as we recover from this crisis.”

ESB and iHeartMedia will replay the show every evening at 9:00 pm ET tonight through Friday, May 15. The song will play on iHeartMedia’s Q104.3, New York’s Classic Rock, and on the iHeartRadio app. Fans can also view the show on the Building’s YouTube page as well as Q104.3’s Facebook page. They are also encouraged to donate to Rise Up New York! The Robin Hood Relief Benefit.

“iHeartMedia and New York’s Q104.3 are proud to partner with ESB and The Robin Hood Foundation to provide the musical backdrop for the lights of ESB moving to the tunes of New York’s own Billy Joel’s iconic Miami 2017,” said Thea Mitchem, EVP of Programming for iHeartMedia. “This is a time when all New Yorkers come together, inspire action, and lend a helping hand to our neighbors in need.”