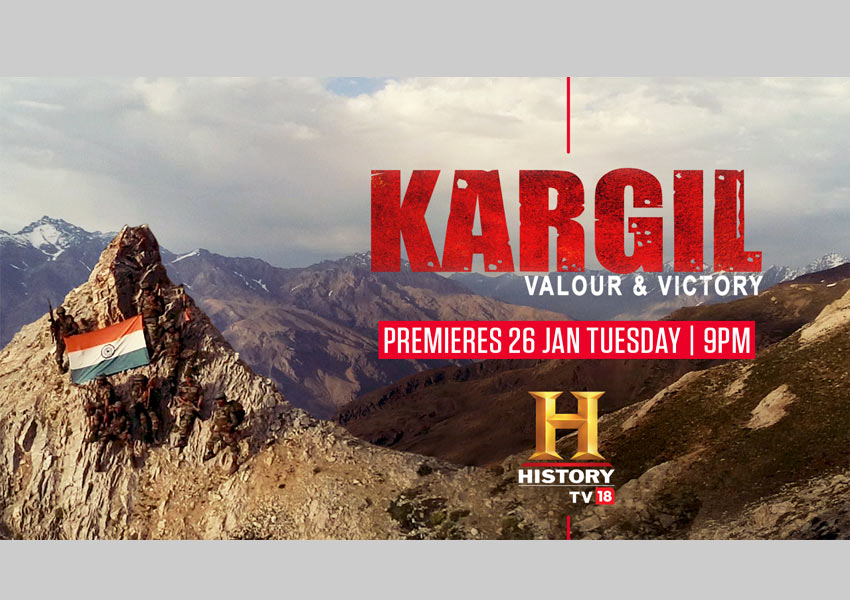 21 years after the Kargil War, the sacrifices of India’s brave still remain etched in the nation’s collective memory. The war began with the infiltration of Pakistani troops into Indian territory in May 1999. After 60 days of fierce fighting, the war ended with the Indian Army recapturing occupied territory. Over the two months of the war, the Indian Army proved beyond doubt that they would stop at nothing short of complete victory. Now, with special access to military personnel and historical records, HistoryTV18’s new film retells the story of ‘Operation Vijay’, with dramatic recreations of hard-won battles on the arduous road to victory. The action-packed, ‘Kargil: Valour & Victory’, premieres on the 26th of January at 9 PM. The military documentary outlines the events of the Kargil War, showcasing true stories of unflinching bravery and the actions of five exceptional young men on the frontline, whose actions have come to define courage and sacrifice for generations of Indians. These men represent the many heroes who fought for India. As many as 30,000 Indian soldiers played their part in the war; over 500 were killed and more than 1,300 wounded. The documentary is a tribute to them all. The film also features top military personnel, who were in the thick of the action at the time. Viewers will hear from former Chief of Army Staff, General Ved Prakash Malik PVSM, AVSM (Retd), former GOC 8 Mountain Division, Lt. General Mohinder Puri PVSM, UYSM (Retd), former Brigade Commander 8 Mountain Artillery Brigade, Maj. General Lakhwinder Singh, YSM (Retd), and strategic defence analyst Nitin A. Gokhale.

The Kargil War was the first armed conflict in the Indian sub-continent in the nuclear age. Responding to the offensive actions from a belligerent neighbour, Indian forces undertook military operations in the most inhospitable Himalayan terrain, at altitudes of over 15,000 feet. Young Indian officers and jawans endured oxygen deprivation, vertical ascents, and extreme conditions on Ladakh’s barren slopes and summits, to oust the enemy and win back strategic peaks. By the time the war was won, India had lost some of her finest. The highest military honour, the Param Vir Chakra, was awarded to Capt. Manoj Kumar Pandey, Grenadier Yogendra Singh Yadav, and Capt. Vikram Batra.  The Mahavir Chakra was awarded to Capt. Anuj Nayyar, while Capt. Haneef Uddin was awarded the Vir Chakra. The documentary tells the story of these bravehearts during the war.

As the ambush of 23-year-old Lt. Saurabh Kalia, at a forward Indian post in May 1999 and his subsequent torture showed, Pakistan had put a ruthless plan into action. Dubbed Operation Badr, the intent was to wrest strategic peaks from India in order to dominate the entire region. Following the large-scale infiltration into Indian territory, the Indian parliament ratified military action to restore the sanctity of the Line of Control and take back lost ground. Indian artillery unleashed unprecedented firepower, with Bofors guns deployed in a direct firing role for the first time, while infantry units defied enemy fire in uphill assaults. Every arm of the Indian Army came together to fight as a unified force. Despite setbacks in the early days of Operation Vijay, young Indian officers led from the front with feats of bravery and warcraft. Soon the tide of war changed and with each triumph, emboldened units took back one besieged peak after another. The suicide mission of 24-year-old Capt. Manoj Pandey, the extraordinary will of 19-year-old Grenadier Yogendra Yadav, the ultimate sacrifice of Capt. Haneef Uddin, Capt. Anuj Nayyar, and Capt. Vikram Batra codename Shershah, as well as the actions of others like them, ensured that the Indian tricolour once again flew high and proud on Ladakh’s peaks.

Avinash Kaul, Managing Director A+E Networks | TV18 and CEO-Broadcast for Network18, said, “Kargil: Valour & Victory is a definitive account of the historic events of the Kargil War and salutes the indomitable spirit of the Indian soldier. A special offering on India’s 72nd Republic Day.  It’s a taut, genre-defining must-watch, with class-leading production values and storytelling. I’m absolutely certain that our viewers will find it gripping and inspiring.”

Watch ‘Kargil: Valour & Victory’ on the 26th of January, Tuesday at 9 PM, only on HistoryTV18.

HistoryTV18’s ‘Kings of Pain’ voluntarily endure excruciating pain, in the service of science!