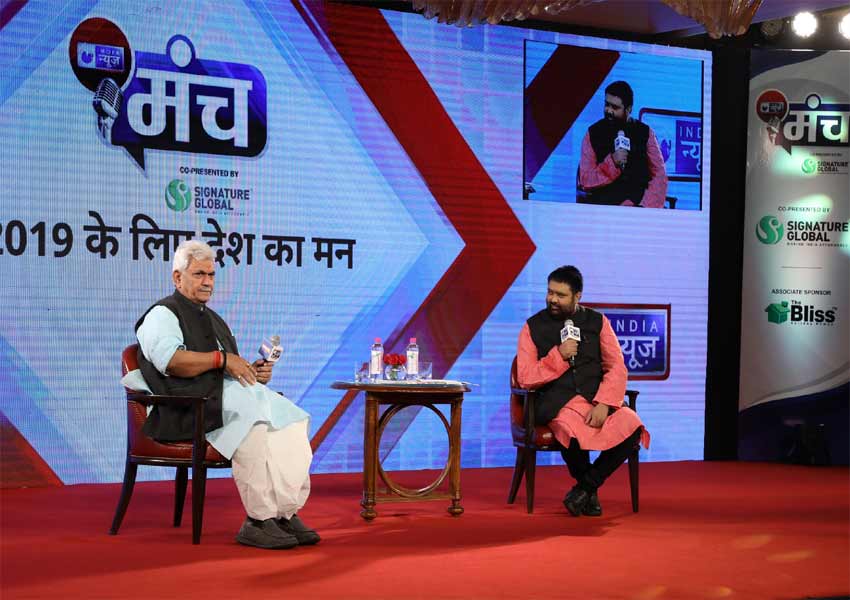 India News organized an exclusive political conclave “India News Manch: Nation’s Mood For 2019” on Monday, 10th December at The Hotel Oberoi. The event was graced by political heavyweights and representatives of civil organizations.

The first special one-on-one session of the political conclave India News Manch was graced by Shri. Manoj Sinha, Minister of Communications and Minister of State for Railways. During the session, various key issues including assembly elections results, future of Indian railways and issues of telecommunications were discussed. When asked about assembly election results, Shri. Manoj Sinha said, “The results of assembly elections will not impact 2019 Lok Sabha Election results.” Further he added that “It won’t be a good thing to believe in any perception after exit poll predictions ahead of December 11 assembly election results.” While discussing on future of Indian railways, he said “Government will soon decide the route for T18 Trains.”  While discussing the issue of call drop, he said “We need to increase the telecom towers in the country for better connectivity.” He further added that, “India won’t lose the 5G Network Race.”

Just a day before the critical assembly elections across Rajasthan, Madhya Pradesh, Telangana, Chhattisgarh and Mizoram, India News Manch, invited several political spokespersons from various parties to discuss the fate of voters. On the session of Rajasthan Elections – Shri. PP Chaudhary, Minister of State, Law and Justice, and Corporate Affairs said “We are comfortably making majority government in Rajasthan.” On the contrary, Shri. Sandeep Dikshit, Member of Parliament & Senior Congress Leader, said “I am confident that Congress will be getting around 120 seats in Rajasthan.” When asked about his choice for the face of Rajasthan next chief minister from Congress, Shri. Sandeep Dikshit, said “Both Shri Ashok Gehlot and Shri Sachin Pilot are strong congress leaders, however I personally feel that Shri Sachin Pilot should become CM of Rajasthan but the final decision will be of MLAs and the Congress committee.”

In a special one-on-one session about Madhya Pradesh assembly election with Shri Kailash Vijayvargiya, National General Secretary of BJP, Shri. Vijayvargiya said “I am confident that BJP will get around 130-150 seats in Madhya Pradesh.” He further added that “It was a close fight in Madhya Pradesh and I compliment Congress that they gave us a tough fight during elections.” On the issue of building Ram temple, he added that “A strong debate in the parliament is required for passing the ordinance by the government. However, the title is currently pending before the Hon’ble Supreme court of India.”

In another session on Chhattisgarh elections, Shri Ramvichar Netam, Member of Parliament, Rajya Sabha and Shri. BK Hariprasad, Member of Parliament, Rajya Sabha discussed about the forthcoming results. During the interaction, Shri Ramvichar Netam said “BJP will once again form the government as Naxalites violence has been greatly controlled during BJP’s rule.” However, Shri. BK Hariprasad said “BJP is exploiting people in the state and this time they will badly lose in the elections.” He further added that “In 2019 elections, Shri Rahul Gandhi will be the leader of Maha Gathbandhan.”

In a special session between Dr. Sudhanshu Trivedi, National Spokesperson, BJP and Shri. Shakeel Ahmed, Member of Parliament, discussed about the 2019 semifinal and forthcoming assembly election results, Shri. Shakeel Ahmed said “Hope the results will be similar to what #ExitPolls have predicted.” Dr. Sudhanshu Trivedi said that “Congress has only done politics on issues of national security and People are smart, they know whom to vote in different elections.”

There was another exclusive one-on-one session with Shri. Randeep Singh Surjewala, Indian National Congress spokesperson, during his session Shri. Surjewala criticized the current BJP government and said “People have rejected the governance of Modi regime.” On the assembly elections results he said that “We are confident in making government in all three states- MP, Chhattisgarh and Rajasthan and also don’t rule out the Congress party in Telangana and Mizoram.”

There was another special one-on-one special interaction with Smt. Uma Bharti, Minister of Drinking Water and Sanitation, Government of India, during her interaction at India News Manch, she cleared the air on her political career and said “I never said that I will leave politics”. On the issue on clean river Ganga, she said “People should also understand their responsibility as citizens to protect river Ganga.” She further added that “Several projects to clean Ganga have been taken up by the government.” On building #RamMandir she said “Why to take an ordinance route to solve the Ram Mandir issue, if it can be resolved through talks.”

The event was attended by policymakers, women entrepreneurs, NGOs and esteemed members of the civil society.