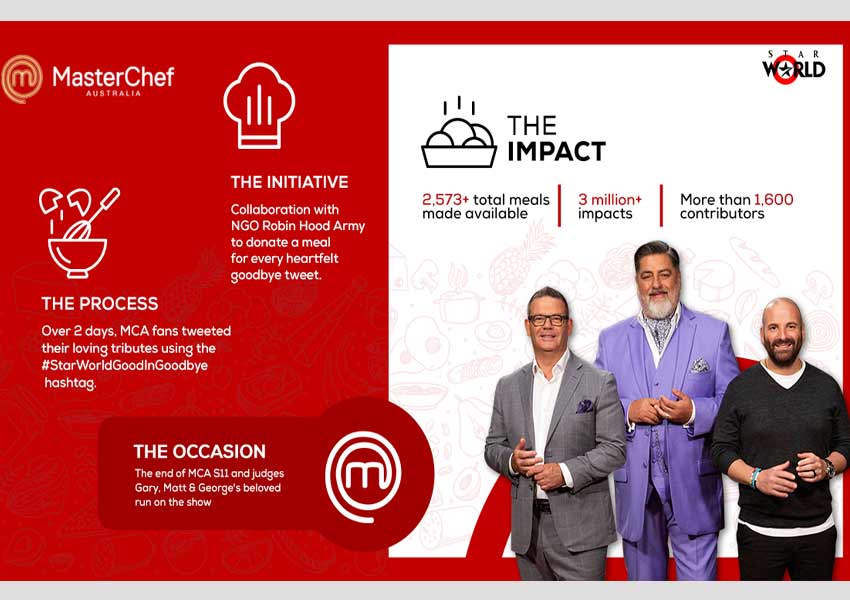 Star World, home to the MasterChef franchise in India, initiated the ‘GOOD in Goodbye’ campaign that enabled people from across the country to donate the meals via commenting on the channel’s Twitter handle. With each comment posted, Star World, in partnership with the renowned zero funds, food rescue organization, The Robin Hood Army, donated meals on their behalf. As the season 11 of MasterChef Australia culminates, the channel urged people to come forward and leave a goodbye message for the trio judges using the hashtag #StarWorldGoodInGoodbye. Through this digital activity which ran throughout two days – 10th and 11th December, the channel was able to garner a whopping 10.06 lakh impressions with over 1.4 crore in reach. With a stunning total of 406 comments and 1025 retweets, Star World donated one meal each, resulting in 2592 meals towards the undernourished and underprivileged.

That’s not it, with so many people from around the country contributing to this benevolent cause, the hashtag #StarWorldGoodInGoodbye was trending on number 3 in India for more than 24 hours. The campaign gained traction from personalities across the world. The MasterChef Australia judges themselves, Gary Mehigan and Matt Preston showed their support by retweeting.

Food is known to dissolve all barriers and opens communities up to love, conversations and happiness. However, not everyone is fortunate to have full bellies or even basic meals and in stark contrast, food wastage continues to be a burgeoning issue around the world. In keeping with this sentiment, Star World took this powerful step to provide meals to the underprivileged through its ‘GOOD in GOODBYE’ campaign. The channel extended their support by putting up a live Twitter wall during their rooftop dinner gatherings across Mumbai and Delhi and encouraged famous personalities like Kubra Sait, Benny Dayal, Yahya Bootwala, Shruti Seth, Simple Kaul, and many more, to participate in this cause. The Robin Hood Army also encouraged people from across 105 cities to join this campaign.

Moreover, MasterChef Australia Season 11, will see the trio judges for the last time, believes and strongly supports food rescue organisations. Did you know that all the food on the sets of MasterChef is either consumed by the crew or given away to food rescue organisations? The judges themselves, too, have time and again emphasized on the importance of recycling food. In fact, Matt Preston serves as a director and ambassador to one of the largest food rescue organizations in Australia. So, after years of watching and delighting in TV’s biggest reality cooking show, Star World’s ‘GOOD in GOODBYE’ campaign is also the channel’s own special way of bidding adieu to Season 11 of the show and pay the perfect ode to the judges.

More than a reality cooking competition series, MasterChef Australia has always been a celebratory platform, revering the finest celebrity chefs, aspiring chefs aka contestants, different countries as well as a wide array of cuisines. Taking this a step further, Star World, through this initiative, culminated the season 11 finale of MasterChef Australia with a more humanistic step – by bringing people from across the country together in its quest to avoid food wastage and feeding 2592 meals to the households in need!