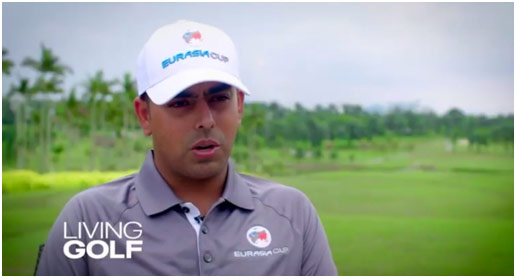 On this month’s ‘Living Golf’, CNN host Shane O’Donoghuetravels to Delhi, India, to profile the golfing landscape in the world’s second most populous country. O’Donoghue meets Anirban Lahiri and SSP Chawrasia, two players who have made it to the pro ranks, and looks at their respective journeys.

CNN also looks at the battle for exposure that golf faces with the country’s most popular sport, cricket. O’Donoghue looks at the histories of both sports in India and plays a round at the exclusive Delhi Golf Club with cricketing legend and keen golfer, Kapil Dev, to compare the similarities and differences of both sports.

O’Donoghue also spends time with PawanMunjal, CEO of the Hero Motocorp, one of India’s most powerful companies and one of golf’s biggest sponsors. At the DLF Golf and Country Club in nearby Gurgaon, O’Donoghue finds out from Munjal what he and others are doing to increase the popularity of the game and what the future holds for golf in India.

Highlights from this month’s ‘Living Golf’:

SPP Chawrasia on the growing number of Indian golfers:

“Every year the Tour is growing, the Indian Tour, so lots of Indian players, they’re doing their Q School and lots of new kids coming from the Tour so that’s a very good sign actually, you know, you can see, next couple of years, the more numbers on the PGA TOUR or the European Tour.”

AnirbanLahiri on the rise of golf’s popularity in India:

“You know when we were kids, it was practically non-existent, I think Tiger definitely popularised the sport in our country, pretty much like everywhere else in the world. But I think over the last few years there’s definitely been a rise in awareness. It’s harder to grow on a TV level, so in that sense I think we have a ways to go, but the best way to fix it is by playing well and winning some of the bigger events and, you know, making a splash, I think that’s what changes the perception.”

PawanMunjal, CEO of the Hero Motocorp:

“That’s the national open, a very important event for me as a patriot, as an Indian, but also a very important event to showcase India, to showcase Indian golf. We know of some countries where those governments have played a very big role in creating those nations into golfing destinations, bringing in millions and millions of dollars of tourist money. I think the Indian government needs to do much more. All of which will encourage more and more players to come into the game of golf.”

Kapil Dev on the future of Indian golf: “You need a youngster to follow the heroes and we have to produce more heroes in golf. If we can, I think this game will be there forever.”

The 30-minute special ‘Destination India’ airs at the following times: