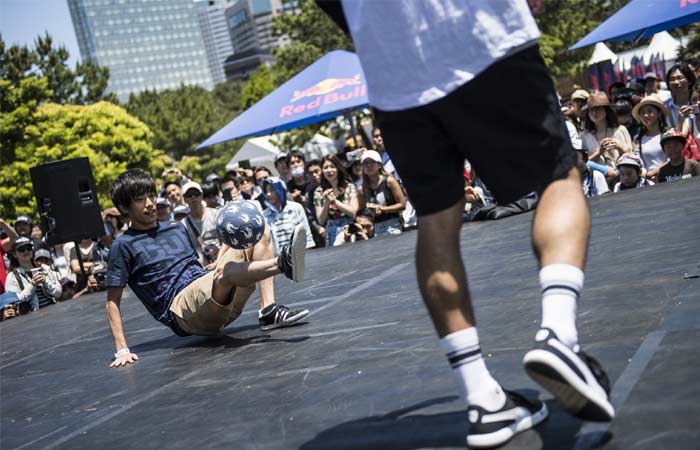 Red Bull athlete Kotaro Tokuda, better known as ‘Tokura’, is undoubtedly one of the biggest names in Freestyle Football and has a long list of achievements in the sport. A local celebrity across Japan, Tokura became an international sensation when he became Red Bull Street Style World Champion in 2012, taking home the gold medal at the finals in Italy. Since then, Tokura has become one of the busiest athletes on the Red Bull roster and has travelled the world extensively, performing his signature “ninja” style tricks and jaw-dropping acrobatic moves such as the “backflip catch”at hundreds of high profile events over the past few years.

Tokura will now be performing these very moves attwo major cities in India– Mumbai and Kolkata- from 10th– 12th November. His first visit will be to Kolkata where he will conduct a workshop for freestyle tricks at WePlay, Newtown, Kolkata followed by the Red Bull Athlete showcasing his skills at the popular Acropolis Mall and interacting with the freestyle football fans there.

Tokura will also be conducting freestyle workshops in Mumbai to engage and encourage young freestyle football enthusiasts. The highlight of Tokura’s visit in Mumbai will be a performance at the Indian Sports Honours Awards Ceremony, which will be held at the Mahalakshmi racecourse on the 11th of November.

Kotaro Tokuda on his visit to India said,“I look forward to visiting Indiaand to experience the craze of freestyle soccer community there. I am honoured to be invited to the Indian Sports Honours Awards Ceremony in Mumbai, and am excited to feel the energy in Kolkata, known to be the hub of Indian Football.”

Tags:
Previous Article
‘Dine like a Maharaja’ at The Leela Ambience Convention Hotel, Delhi
Next Article
Vartha Prabhatham continues to be the most favourite Morning Show