Move on selfies, it is time to Velfie for Yuvraj! 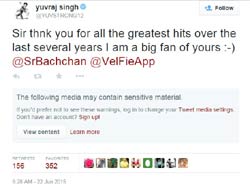 Velfie, the new age mobile app that helps one communicate in an entertaining but personalized way has found a loyalist in ace cricketer Yuvraj Singh. Always known to be a fun-loving and flamboyant personality, Yuvraj has recently put up two velfies for his fans that have won him applause. While his first velfie was dedicated to Narendra Modi on the completion of one year in office and saw him lip-syncing lines from the PM’s speech, his recent velfie sees him imitate Amitabh Bachchan’s swagger in a dialogue from his famous film Kalia. Not surprisingly, the videos have been a smash hit with Yuvi’s fans and followers, and have crossed over 50,000 views on just Facebook alone.

The much-in-news velfies have created instant buzz among social media circles earning him positive reviews and appreciation galore. The velfie has become a medium of choice for the dashing cricketer to connect with his fans as well as post tributes to the public personalities he looks up to. Whether it is his adulation for Big B the superstar or the iconic leader that is Modi, Yuvraj seems to be enjoying playing the part of a fan himself through these velfies. After all, a picture may be worth a thousand words, but a Velfie seems to be worth much applause for Yuvi!

Tags:
Previous Article
Buy Celkon Millennia ME Q54 on HomeShop18 and meet the Indian Cricket team!x
Next Article
Michael Jackson: The Magic, The Madness, The Whole Story now in Marathi

Whirlpool partners with ESPNcricinfo for IPL 2020 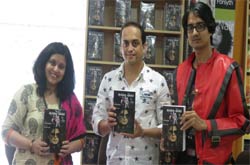