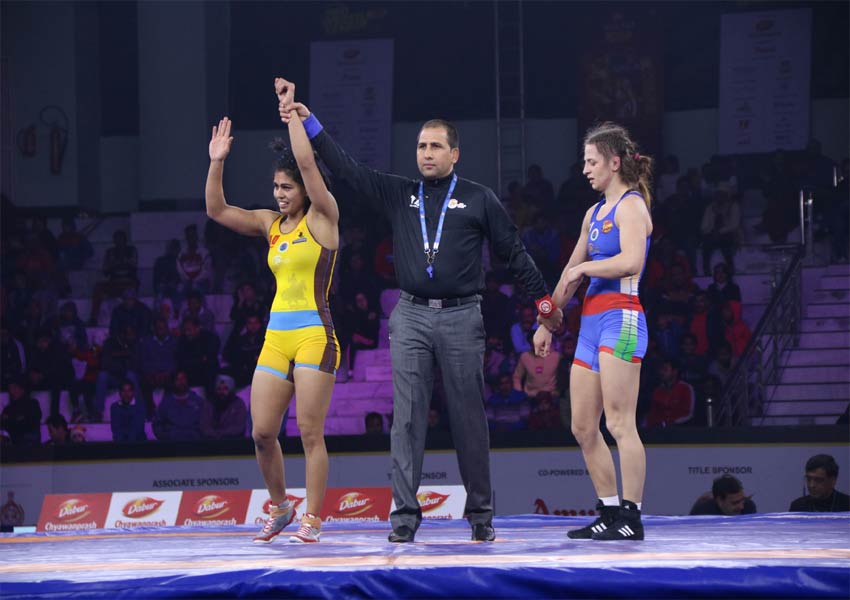 Debutant MP Yodha’s captain Pooja Dhanda lived up to her favourite tag as she overcame a strong challenge from Romanian Katherina Zhydachivska of Delhi Sultans 6-0 and paved the way for the team’s first win in the Pro Wrestling League (PWL) season 4 currently underway at the Tau Devi Lal Indoor Stadium here in Panchkula today. Yodha were trailing 2-3 when Pooja came to the mat and her win pushed the tie to the decider.

In the decider, Rio Olympic Games participant Sandeep Tomar of MP Yodha overcame the early challenge of Delhi Sultan’s national championships bronze medalist Pankaj to win the decider 9-7. It wasn’t easy for Tomar as Pankaj kept on pushing him but his experience helped him sail through in the end.

The bout between the former and current national champions Deepak and Praveen in the 86kg category heated up the proceedings in the cold winter evening. Praveen took a one point lead at the break but Deepak bagged six points on the trot to send shockwaves in the Delhi camp. Praveen bagged one more point (7-6) but Deepak won the bout by winning the last point (7-7).

In the 53-kg category, U-23 World Championship silver medalist MP Yodha’s Ritu Phogat trailed 0-1 against national champion Pinki after the  first round. Ritu tried very hard to break the deadlock and managed to surge 3-1 ahead midway through the second round. But Delhi Sultan’s Pinki came back strongly to pin Ritu down and clinch the bout 5-3.

The 2017-18 World Military Championships gold medalist Khetik Tsabalov displaying excellent technique put Delhi Sultans ahead winning the third bout of the evening quite easily against Vasil Mikhailov 17-2 after the referee awarded the bout to the former on technical superiority.