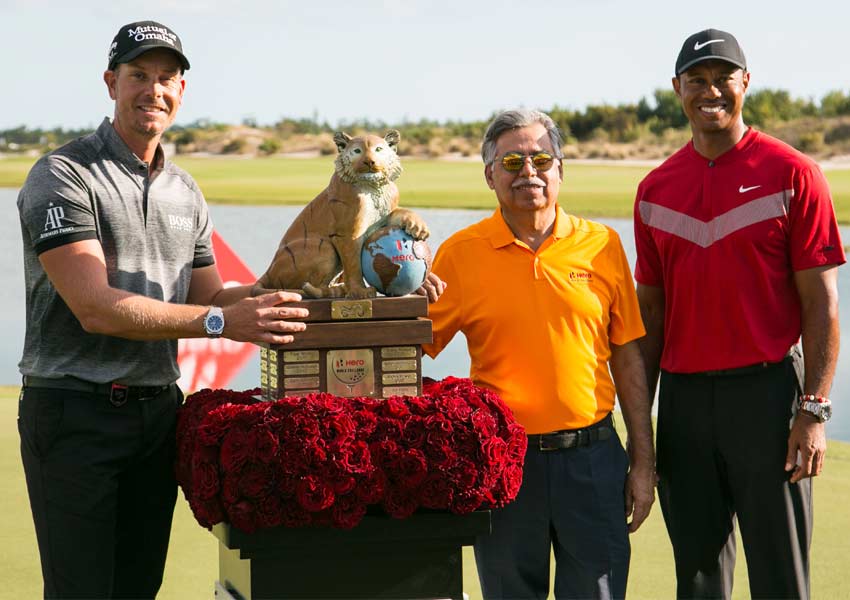 Henrik Stenson chose Tiger Woods’ tournament, The Hero World Challenge, to end a nearly two and a half year title drought with a superb win on the dramatic final day at Albany Golf Course.

Starting one shot behind the overnight leader, Gary Woodland, the 43-year-old Swede Stenson (66) quickly moved into the pole position early on. He then withstood a strong challenge from Tiger Woods (69), Justin Thomas (70) and Jon Rahm (66), all of whom had a share of the lead at some stage. Stenson moved ahead one final time on the 15th with a decisive 5-wood from 260 yards that he nearly holed for an albatross. His eagle brought him to 18-under and he stayed there with three more pars, including a 45-foot two-putt effort to close the deal.

Dr. Pawan Munjal and the tournament host Tiger Woods presented the famous Tiger Trophy to Stenson, who has previously been a runner-up in 2014 and 2016.

Stenson, 40th in world rankings at the start of the week, got a wildcard to play the event. He totalled 18-under to Rahm’s 17-under, which included a great birdie-eagle-birdie run between 14th and 16th. He was unable to make any more birdies and ended second, one shot behind.

Asked how it felt to win a trophy after a long gap, the Swede said: “Oh, the last win at Wyndham. Yeah, that was a little while ago. I mean, I haven’t played bad golf, but I haven’t put myself in contention enough. It’s the same this year if you’re looking at the results”.

Stenson added, “I’ve got a couple of top-5s, top-4s on the European Tour and a couple of top-10s on the PGA TOUR and then lots of finishes between really 15 and 25, I think. So it’s not bad, but it’s not what I want and not what I can perform, either. It’s just been a very average season, but it finished on a high and this should give us some good momentum. Rest up and start the next season fresh.”

Stenson’s win raised his confidence as he said, “It’s (the ranking) is down, but it’s not a disaster. I can compete with the best, and I guess I showed that.”

Woods, who made an early charge, before finishing fourth, was all praise for Stenson. Woods said, “I think we can all agree on, off where he has come back from. He completely lost his game there for a while and couldn’t hit it on the map. But, then he came back, worked all the way to being a major champion and won tournaments all around the world. We all know he’s one of the best ball-strikers there is out here, it’s just how well he putts, and this week he definitely putted well and putted honest.”

For Woods, one of the minor takeaways was outscoring Thomas for the first time in 15 rounds together. Even that happened after Thomas double bogeyed the 18th for a 70 as Woods shot 69.

“I don’t think that’s how we wanted it to end up”, Woods said with a laugh. “If I was going to get him, it would have been nice for either of us to have a chance to win the tournament.”

Tied fifth with Thomas was Albany-resident, Justin Rose, whose 65 was the joint low card of the week with Kevin Kisner. Kisner was tied-seventh with Woodland (73), who led on first and third days.

Stenson, ranked 40th at the start of the week is now likely to move to 26th. His last win was 50 starts ago at the Wyndham Championships in 2017. Some work with swing coach Pete Cowen after the European Tour season ended in Dubai last week, helped in the Bahamas.

U.S. Open champion Gary Woodland, who started the final round with a one-shot lead, ran into trouble chipping up the slope on the par-5 third hole and made double bogey. He never recovered, shot 73 and tied for seventh.

The Americans, 11 of them from this field plus Dustin Johnson, are off to Australia on a charter for President’s Cup to play the Internationals led by Ernie Els.

The Hero World Challenge contributed $184,500 to the ONE Bahamas Fund through a charity challenge to the players. The tournament donated $500 for each birdie, $1,000 for each eagle and $2,500 for each hole in one. The 18 players in the field made 337 birdies and 16 eagles over the four-day tournament. The fund is to be used to rebuild areas of Bahamas affected by the Hurricane Dorian.