Step into the world of Arsenal FC with Arsenal TV, exclusively on VOOT SELECT 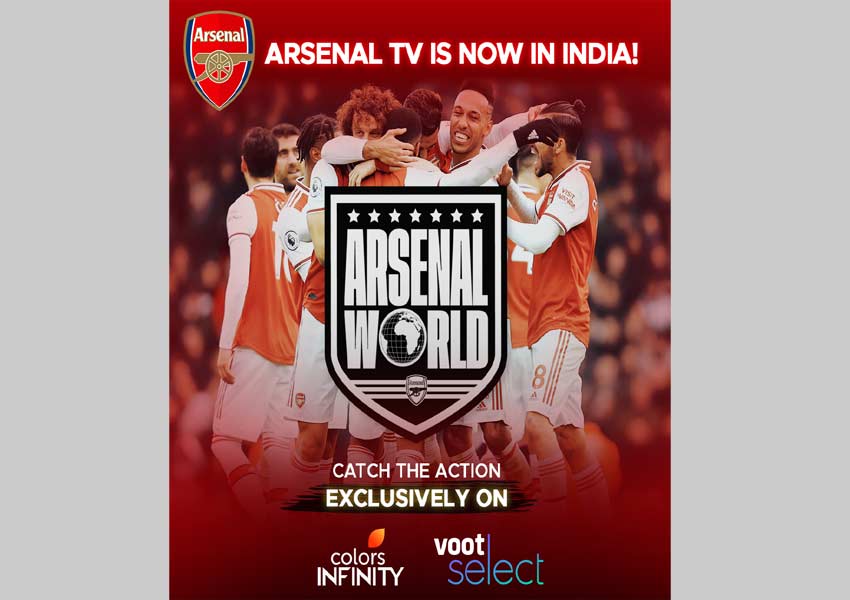 Fans around the world rejoiced at the announcement of football season resuming albeit behind closed doors. English football including the Premier League and the FA Cup, has been a glimmer of hope for fans who have been impatiently waiting whilst being confined to their homes amidst the lockdown. The wait is now over! In India, Arsenal fans, famously called as ‘Gooners’ have a reason to celebrate as Viacom18’s premium English entertainment destinations VOOT SELECT and COLORS INFINITY are exclusively showcasing Arsenal TV on the platform and channel respectively. Gooners will now have access to full matches, press conferences, player interviews, training videos, match highlights, post-match analysis and BTS footage of their favorite team, through Arsenal TV programming – Arsenal World and Arsenal 360.

Football is the most watched and followed sport in the world and the fanfare in India has been rising exponentially, with legendary clubs like Arsenal FC being amongst the most popular clubs in the country. Fans will get an even more immersive experience and insight to the matches through special programming and exclusive access to club related content they never had before.

Along with complete matches of Arsenal FC in the Premier League, European and FA Cup, viewers can watch the exclusive programming of Arsenal World and Arsenal 360, as well as unforgettable moments from previous seasons including the season of ‘The Invincibles’. Furthermore, Arsenal TV will be a window to the training videos, interviews of manager Mikel Arteta, star players Mesut Ozil, Pierre-Emerick Aubameyang, Granit Xhaka, David Luiz and the rest of the squad.

Don’t miss out on the exciting action and exclusive content from the London derby against Tottenham Hotspurs, against newly crowned champions Liverpool, and many other EPL, Europa Cup and FA Cup matches this season, on VOOT SELECT.