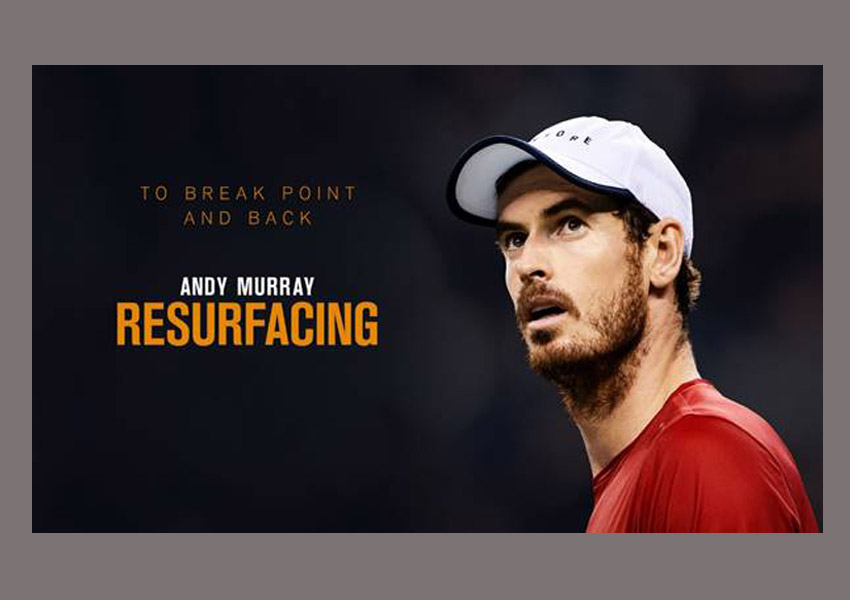 Amazon Prime Video today announced the documentary Andy Murray: Resurfacing, an unprecedented account of the tennis champion’s painstaking rehabilitation from injury told in his own words, will launch exclusively on Prime Video. With inside access to his life, it follows Andy from the inner sanctum of surgical theatres, to the most intimate of spaces shared with family and team members. The feature-length documentary will be available exclusively on Prime Video on Friday 29 November in over 200 countries and territories worldwide.

When Andy Murray stepped onto the tennis court to play at Wimbledon in 2017 he was the world number one, fighting to defend his Wimbledon title. In the resulting two-year period since sustaining a chronic hip injury, his ranking has slid towards triple figures, as he’s undergone multiple surgeries in the hope of being fit enough to compete on the world stage once more. At a time when the world’s media were about to write him off, and his devoted fan base were waiting with bated-breath for news on his recovery, the former World No 1 decided to tell his story exclusively in this cinematic documentary.

Andy Murray: Resurfacing was initially intended to be a straightforward comeback from surgery story, but has since become a two-year, human story about a man unwilling to accept defeat. Following Andy almost every day throughout this period, the film gives viewers a unique insight into the complex physical, mental and emotional challenges he has faced on his journey to try and fix the unfixable, only to have his hopes dashed time and time again.

Charting gruelling medical interventions, recovery programmes and his eventual come back in 2019, Andy Murray: Resurfacing is a candid, personal portrait of this respected, private sportsman at his most vulnerable, as he attempts to overcome the pain of injury and to resurrect his professional sports career. As well as hearing first-hand Andy’s hopes and aspirations for the future, the film features in-depth interviews with his family, team members and rivals, including Federer, Nadal and Djokovic.

“I knew I was at a critical point in my career. At times it felt like I was letting people down by not being able to perform on court, and I wanted to give them an insight into what I was going through. I wanted to show the ups and downs of professional sport,” said Andy Murray. “The film will take you on a journey through what were some of the lowest, most difficult periods of my life both physically and mentally, and will hopefully show and inspire viewers, that with the right mindset and work ethic, anything is possible.”

“This revealing documentary will take viewers on an emotional journey with Andy, giving them an inside look into the strength and determination of a true champion, as he fights his way back to the highest level of the sport after a near career-ending injury,” said Martin Backlund, Head of Content for Amazon Prime Video, UK. “The documentary adds to the great collection of live sports and behind-the-scenes sports documentaries only available on Prime Video, including recent fan favourites All or Nothing: Manchester City, Inside Borussia Dortmund and El Corazón de Sergio Ramos.”

Andy Murray: Resurfacing is produced and directed by Olivia Cappuccini. It’s produced by John Battsek for Passion Pictures (Hillsborough, Listen to me Marlon and Oscar-winning feature documentaries Searching For Sugar Man and One Day in September), in collaboration with Pitch Productions and Scenes of Reason.

The documentary joins Prime Video’s growing line-up of sports documentaries, including its Amazon Original sports docuseries All or Nothing: Manchester City, All or Nothing: New Zealand All Blacks, and All or Nothing seasons with American Football teams, as well as Take Us Home: Leeds United, Make Us Dream, Inside Borussia Dortumund and El Corazón de Sergio Ramos.

In the UK, Prime members also have exclusive access to live tennis matches with the US Open, 37 ATP Tour events and from 2020 WTA tournaments, allowing customers to watch the best in women’s and men’s tennis all in one place for the first time in the UK. In addition to live tennis, starting from the 2019/20 season, UK Prime members will also have exclusive access to 20 Premier League matches per season in a three-year deal, as well as NFL Thursday Night Football games, which are currently available to customers in more than 200 countries and territories worldwide, at no extra cost to their Prime membership.

Tags:
Previous Article
Hero Motocorp Launches India’s First BS-VI Motorcycle
Next Article
#MyLittleGenius: Got a Genius at Home? It’s time to show it to the world

#MyLittleGenius: Got a Genius at Home? It’s time to show it to the world
MediaInfoline Nov 09