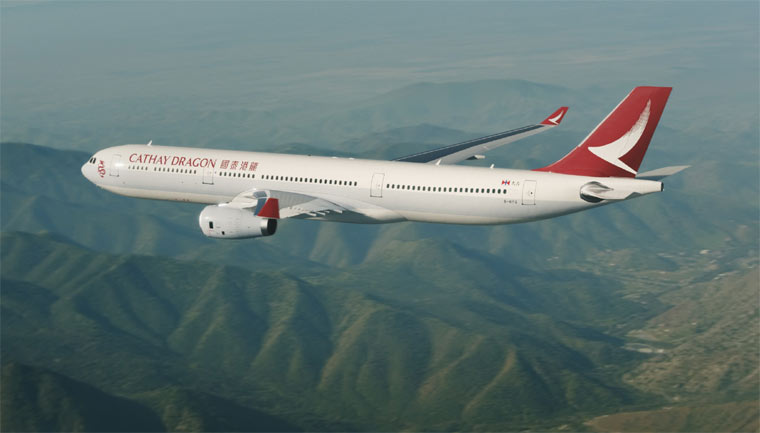 Cathay Dragon celebrates 10 years of passenger flight operations between Bengaluru and Hong Kong on 02 July 2018. Since flights were launched in 2008, more than 800,000 passengers have travelled from Bengaluru and approximately 32,000 tons of cargo have been carried.
Cathay Dragon began daily flights in 2008 operating an Airbus 330-300 aircraft. The launch of flights to Bengaluru marked the first time for Cathay Dragon to operate flights from India.
In celebration of the 10th anniversary, the airline’s check-in counters wore a festive look and passengers travelling from Bengaluru on KA 153, 02 July were given commemorative gifts. The Airline has also launched a special offer – 10% discount on fares from Bengaluru to destinations such as San Francisco, Los Angeles, Vancouver, Toronto, Seoul, Narita, Taipei and Hong Kong. This discount is applicable on tickets booked on the airline’s website for travel right until the end of the year.
Cathay Pacific’s Regional Sales and Marketing Manager – South Asia, Rajesh Menon says, ”We have always been very confident of the potential that Bengaluru holds, which is why we launched services in 2008 with daily flights. To have completed 10 successful years of operations from Bengaluru is indeed a great milestone and we are very proud. Karnataka’s GDP growth at 7% is in line with the national average. From South India, the highest traffic to countries like North America, Japan & Australia comes from Bengaluru. At Cathay Dragon we are perfectly positioned to cater to this traffic with excellent connections to these key destinations with our differentiated product and service”.
On the cargo front, Cathay Dragon also carries cargo in the belly of its passenger aircraft in addition to the dedicated Cathay Pacific freighters that operate from Bengaluru. Cathay Pacific’s Regional Cargo Manager – South Asia, Middle East and Africa, Anand Yedery says, “Bengaluru is an important market for us, for both exports and imports and contributes to around 15% of the India cargo revenue. We are able to uplift approximately 15 to 20 tons of cargo per flight, in the belly of our Cathay Dragon aircraft. Belly operations are extremely helpful as it offers us the opportunity to cater to a wide range of products such as pharmaceuticals (active & passive), garments, herbal products, auto parts, medical equipment to name a few. This frees up space on our freighters to handle main deck shipments from Bengaluru such as aircraft engines.”

Cathay Dragon to modernise and expand its fleet
MediaInfoline Aug 21

Cathay Dragon to modernise and expand its fleet