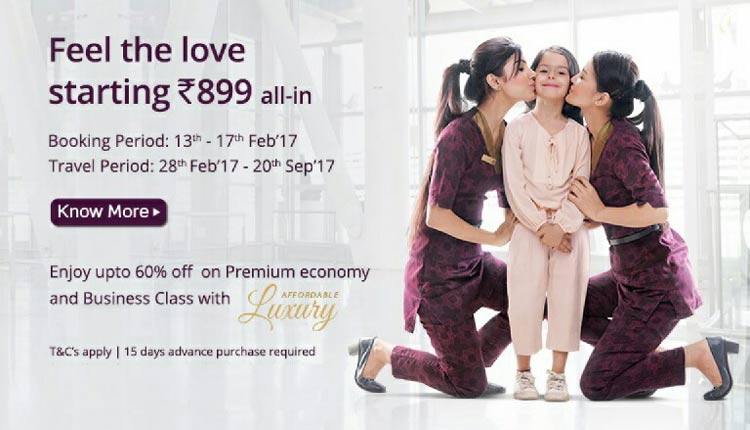 Vistara, India’s newest and fastest growing full-service carrier, today announced a special five-day Valentine’s Day Sale, offering unbelievably low fares starting INR 899 all-inclusive on Economy Class for one way travel. As part of its ‘Affordable Luxury’ fares, the special Sale also offers up to 60% discount on Business Class fares and up to 40% on Premium Economy, a great opportunity for travellers to celebrate in style with their loved ones this Valentine’s Day.

Customers can choose from 20 destinations in India, including the recently launched Port Blair (Andamans), Amritsar, and Leh (Ladakh), as well as the newly launched Kolkata – Pune route, as they make their travel plans for the year.

Sample Economy Class fares on offer are as below (one-way, all-inclusive fares, partial listing only):

Bookings under the Sale are open from February 13, 2017 to midnight of February 17, 2017 for travel between February 28, 2017 and September 20, 2017. Club Vistara members can enjoy an additional 10% off sales fares by using the Promo Code CV10 when making their booking on airvistara.com.

Commenting on the launch of the Sale, Mr. Sanjiv Kapoor, Chief Strategy and Commercial Officer, Vistara, said, “Vistara is not just another airline, it is the most elegant and talked about airline in India, as would befit an airline brought to you by Tata and Singapore Airlines. Sales such as this allow those planning early to experience the refreshing difference of flying Vistara, with its stylish interiors, leather seats, gourmet meals and unmatched service.”

He added, “For those wanting to make the experience even more special for themselves or their loved ones this Valentine’s Season, they can opt for Business Class or Premium Economy at surprisingly affordable fares”.

Seats under this offer are limited and are available on a first-come, first-served basis, and the earlier one books, the better the chance of grabbing the lowest fares. Bookings under the offer are now open on www.airvistara.com, Vistara’s iOS and Android mobile apps, at Vistara’s Airport Ticket Offices (ATOs), through Online Travel Agencies (OTAs) and travel agents. Vistara’s GDS partners include Abacus, Amadeus and Travelport, enabling customers to book via all major channels. Bookings under this sale cannot be made at Vistara’s call centre.

Vistara continues to grow and gain accolades as it redefines air travel in India by challenging the status-quo in the Indian aviation sector with its unmatched excellence in offering seamless and personalized services. In a short span of two years, Vistara has expanded its network to 20 destinations with over 500 weekly flights and a fleet of 13 aircraft, having flown 4 million happy customers already.

Tags:
Previous Article
Atos marks “one year to go” until the Olympic Winter Games PyeongChang 2018
Next Article
WATConsult along with Mother Dairy celebrate this Valentine’s Day with #ForeverIceCream

Gobble is back with an all-new travel series ‘Bazaar Travels’