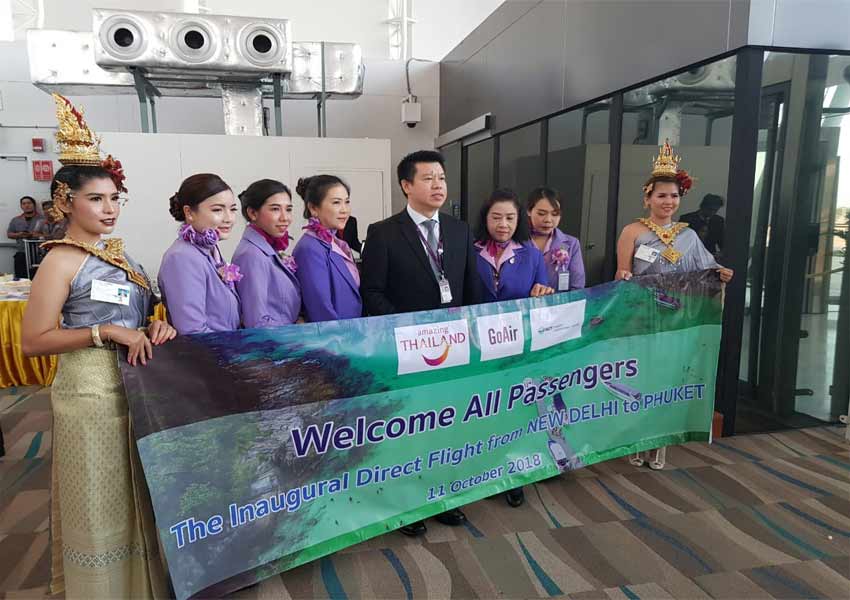 GoAir who had recently announced commencement of its international operations, launched its first ever direct international flight to Phuket out of New Delhi. The new international schedule introduces direct flights connecting Phuket to India – Mumbai and New Delhi

The launch was initiated with the customary lamp lighting ceremony followed by ribbon-cutting. Flight G8 031 was given a ceremonial flag off today early morning at 01:00 with 182 passengers which departed from New Delhi on its maiden flight to Phuket International Airport, Phuket. In sync with the aviation tradition to mark key milestones, the flight was welcomed with a grand water cannon salute upon its arrival at the Phuket Airport.

Speaking on the occasion, Mr. Cornelis Vrieswijk, Chief Executive Officer, GoAir said, “The launch of our first service to Phuket represents another step of transition from a domestic carrier to a global airline. Phuket is a key market in India and holds a significant base for business and tourism. We are delighted to welcome Phuket as a part of our new global network; we look forward to providing more flexibility of choice to our customers and contributing to this growth.”

Tickets for the new flights can be booked through the company website www.GoAir.in or online travel portals, GoAir Call Centre, airport ticketing offices, through travel agents and the GoAir mobile app that is available on both Apple iOS and Google Android.