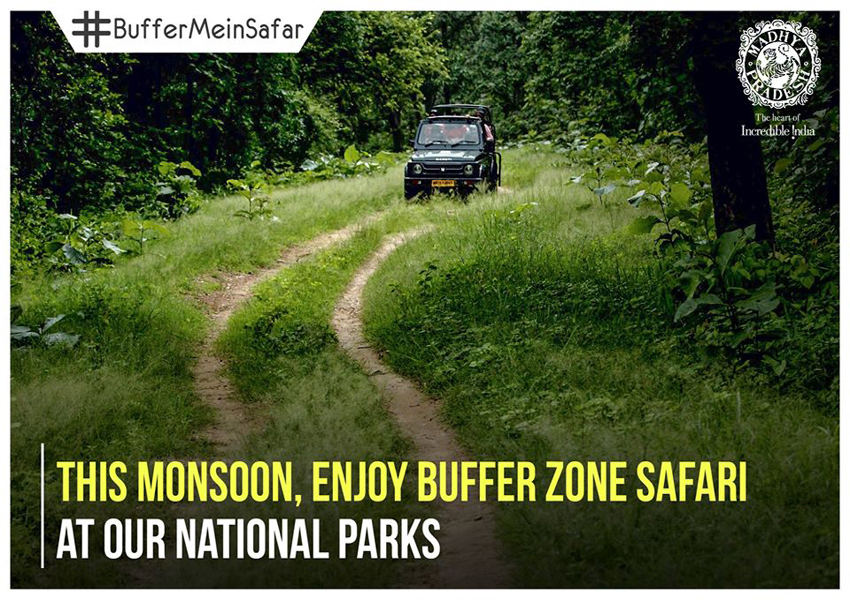 Madhya Pradesh Tourism Board Launched #BufferMeinSafar Campaign for all the wildlife lovers. The campaign aims to attract more tourists to the National Parks and wildlife sanctuaries of Madhya Pradesh. The National Parks holds such a fierce, unshakable fascination that they are ready to host the tourist with all the safety guideline.

During the monsoon months from July to September the core area of the forests are closed but the buffer areas of the forest remains open for exploration. The campaign title #BufferMeinSafar itself highlights that the wildlife of Madhya Pradesh will offer activities in its buffer areas including Wildlife Safaris, Bird Watching etc.Besides the thrill of spotting various species in the buffer zones, the different hues of green cover is a feast to the eyes.These activities enthrall the tourist towards the beautiful wildlife of Madhya Pradesh.

MP Tourism looks forward to boost morale and bring back the confidence in the tourism sector by offering tour packages to the tourists that are specially designed keeping in mind safe travel, stay, and excursion for prevention during pandemic. In order to facilitate smooth travel, the board has come up with short road itineraries mainly for 2 -3 nights and solves the boredom of a weekend from the neighbouring states with all safety measures that are required at the destination.

Madhya Pradesh has numerous wildlife destinations with 6 Tiger reserves- Bandhavgarh, Kanha,Pench, Panna, Satpura and Sanjay Dubri,11 National parks & 24 Wildlife sanctuaries such as Ratapani Wildlife Sanctuary and Chambal Ghadiyal Sanctuary. Madhya Pradesh has re-gained the tag of being “The Tiger State of the Country” by having maximum Tiger count (526) in the state. The roar of Tigers has increased in the dense and beautiful forests of Madhya Pradesh.

Madhya Pradesh Unlocks travel, a shout out to pack your bags #intezaaraapka