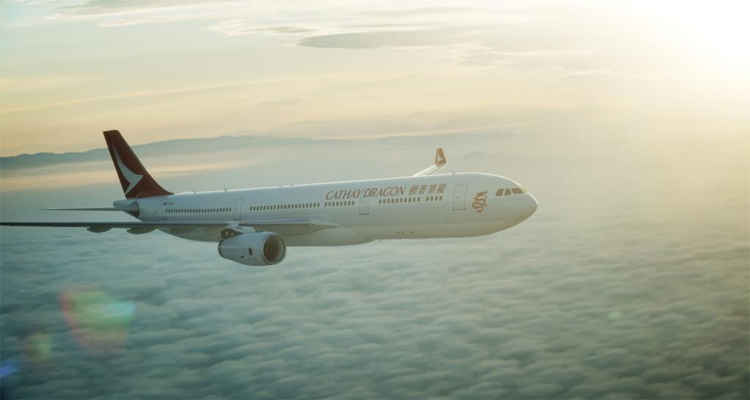 Excited passengers this morning welcomed the first aircraft displaying the new Cathay Dragon livery as it took flight from Hong Kong to Beijing.

An important element of the rebranding is the design of the new livery for Cathay Dragon aircraft. This features the recently updated Cathay Pacific brushwing on the tail, showing clearly and simply the relationship between Cathay Dragon and Cathay Pacific. The Airbus A330-300 aircraft that departed as Flight KA900 to Beijing this morning was the first in the fleet to display the new livery.

Cathay Dragon Chief Executive Officer Algernon Yau said: “We are thrilled to witness the Cathay Dragon livery take off into the sky for the first time. Today marks the beginning of a series of exciting changes and offerings that the new Cathay Dragon brand is going to bring to our customers.

“This new livery visualises a new era of growth for Cathay Dragon. At the same time as celebrating Dragonair’s heritage, it looks to the future with a contemporary, yet timeless, new image.”

To celebrate the introduction of the Cathay Dragon livery, the airline has launched a social media campaign calling on the public to submit a picture of the new-livery aircraft with the hashtag #CathayDragon to give them a chance of winning a special aircraft model gift set. The campaign will run for a week, starting from 5 April 2016, on Facebook, Twitter and Instagram. Anyone who can capture the aircraft as it flies to destinations including Beijing and Shanghai is eligible to take part. Full details, including terms and conditions, can be found at http://bit.ly/1USiNf8.

With the first Cathay Dragon aircraft already in service, the new livery will be progressively introduced to the rest of the airline’s fleet. The airline is also in the process of reviewing the overall passenger experience in preparation for the official rollout of the Cathay Dragon brand later in 2016. At that time, the Cathay Pacific Group will launch a major international advertising and marketing campaign to promote wider recognition of Cathay Dragon and the benefits this rebranding will bring to passengers.

Cathay Dragon to modernise and expand its fleet
MediaInfoline Aug 21

Cathay Dragon to modernise and expand its fleet